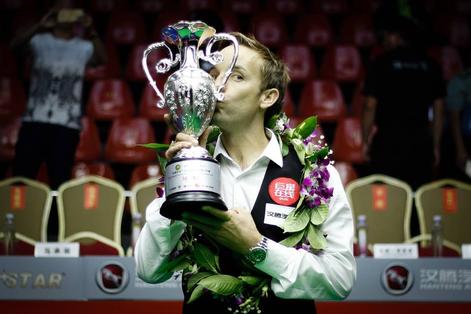 Congratulations to Ali Carter who withstood a spirited recovery from opponent Joe Perry to claim the 2016 World Open; the fourth major title of his career.

The first six frames of the opening session were shared, but Carter broke free when claiming the last trio of the afternoon to go 6-3 ahead.

On the resumption he extended his profit to 8-3. Perry stopped the rot with Frames 12 and 13 (131 break), but after the last mid-session interval, 'The Captain' moved just one away at 9-5.

At the point of no return, JP produced some clinical snooker which included efforts of 106 and 92 to reduce his arrears to just 9-8 - firmly back in the tie.

But with momentum shifting, Carter kept his nerve by responding with a coolly compiled 127 total clearance for his first major trophy since the 2013 German Masters.

The £90,000 he now banks puts him back into the World's Top 16 - a position he is certainly worthy of when you consider the events he missed because of his health issues.

​The 37 year old moves into 18th place on the all time list of major ranking winners - his previous three were the 2009 Welsh Open, 2010 Shanghai Masters and 2013 German Masters.

Carter is now also guaranteed a lucrative place at the invitational Champion of Champions in November which carries a top prize of £100,000.

Once again there is a small break until the next tournament on the calendar - The Paul Hunter Classic in Furth, Germany towards the end of August.