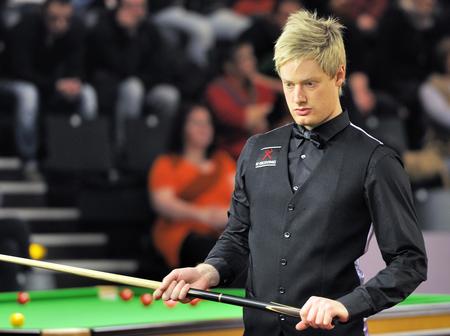 The same venue, but a new day and a different competition began at the Guild Hall in Preston on Tuesday.

Much like qualifying for this past weekend's Indian Open, the World Open returns after an absence from the World Snooker calendar last season.

Over the next three days, players will have to negotiate a hurdle of qualification in order to appear at the venue stages in Yushan, China come the end of July. All matches here are the best of 9 frames.

After a relatively average to low standard during the Indian Open preliminaries, the quality today was certainly upped. Just a total of nine centuries were made during the entire bank holiday period, but today has already harvested exactly the same number.

Half of the World's current top 16 gave the IO a miss, but just Mark Allen and Ronnie O'Sullivan have elected not to enter this. (Fixtures with defending champion Shaun Murphy, World Champion and WN1 Mark Selby, and top Chinese duo of Ding Junhui and Liang Wenbo have had their matches held over to the venue).

The highest ranked player to compete on Day 1 was World Number 5 Neil Robertson.

The Australian began the match in bizarre circumstances, being docked a frame due to arriving at the venue late because of traffic on the M6.

Thankfully he turned up before he had to give any more frames away, but opponent Sydney Wilson went into a 3-0 lead with a help of a 100 in Frame 3.

​Robertson replied by taking the next trio to level it up 3-3 after breaks of 71 and 99 helped him on the way.

However, the former World Champion crafted a dramatic counter attacking break of 68 to snatch it and force a decider, before then chalking up a 64 in the last for a narrow 5-4 success.

Other members of the current elite involved on Tuesday were Ricky Walden, Joe Perry and Barry Hawkins - all advanced with victories over Jason Weston (5-2), Hossein Vafaei Ayouri (5-3) and Zhao Xintong (5-0) respectively. Along with contributions of 73 and 72, Hawkins also designed a 142 -  the highest of the day, and thus event so far.

Stephen Maguire and Mark Davis have been the most comfortable throughout the early season running so far. The pair booked their places for India with 4-0 wins, and they'll notch up more air miles again after securing qualification for China without dropping a frame as well.

Maguire saw off Fang Ziongman 5-0 with a top run of 55, whilst Davis totted up efforts of 52, 68 and 50 in dispatching Rhys Clark by the same scoreline.

Kurt Maflin recovered from the disappointment of not making Hyderabad with a 5-1 victory against David John here. The Norwegian finished very strongly; rattling in successive runs of 72, 133 and 101.

Tom Ford was another player to bounce back well, breaks of 76, 83 and 112 helped him negotiate rookie Christopher Keogan 5-2.

Aided with an 83, 74 and a 141 in the last, Jimmy Robertson saw off Fraser Patrick 5-2, and local lad Ian Burns also hit treble figures with a 110 in eliminating Steven Hallworth 5-3.

Ben Woollaston appeared to be coasting in his encounter with Yan Bingtao; the 2015 Welsh Open finalist making 51, 134 and 64 in going 4-0 up.

But the former World Amateur champion teenager threatened a sensational comeback after reacting with breaks of 56, 63 and 102 to reduce his arrears to 4-3, before Woollaston clinched it in the eighth.

Probably the most competitively matched clash of the day was that between Michael White and a resurgent Anthony Hamilton.

The lead changed hands between the pair, but it was Welshman White who nicked it with a 70 in the decider. He had earlier made 76 and 88 in squaring it twice before the mid-session interval.

Comeback of the day goes to Belgian youngster Luca Brecel. The German Masters and Shootout runner-up never lead during his meeting with Peter Lines; trailing 3-1 and 4-2. But the 21 year old managed to chalk up the last hat-trick of frames for a 5-4 win.

Jamie Burnett got the better of Scottish compatriot Ross Muir 5-3, and Cao Yupeng made sure he'll be present for a home event after ousting Martin O'Donnell 5-4 - it was Cao's first victory over a fellow professional since 2015 International Championship qualifying.

Written and published by Michael Day on the 1st June 2016​​​