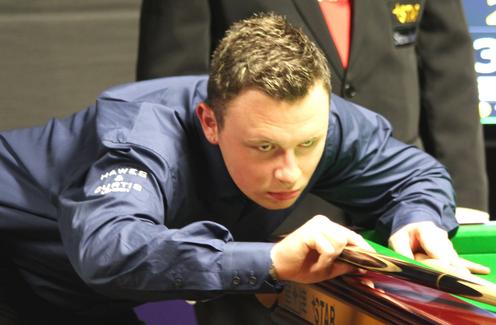 It was yet another good day for the top stars in action, as the line-up for the venue stages of the 2016 World Open in Yushan, China was confirmed.

John Higgins celebrated the start of his 25th consecutive professional season with a comprehensive 5-0 win over Gareth Allen. The 4 time World Champion crafted breaks of 67, 101 and 57 in the process.

Mark Williams recovered from losing the opening frame to Scott Donaldson by peeling off the next five, whilst Marco Fu got the better of amateur Ashley Hugill in a very entertaining encounter.

Hugill has somewhat of a 'giantkiller' tag -  previously shocking Neil Robertson, and only last weekend defeating Ross Muir to qualify for the Indian Open.

With today's results, it means just Martin Gould (of the top 16 players who entered) will not be making the trip come the end of July.

One of the main stories of the day was that of Welshman Duane Jones (pictured); the 23 year old continuing his impressive start to the new 2016/2017 campaign with a 5-3 win against Dechawat Poomjaeng.

Despite Poomjaeng registering a hat-trick of half centuries, Jones contributed with a 74 and 70.

Another player who struggled to pick up results last season was James Cahill; he outright qualified for a major ranking event venue for the very first time by ousting Li Hang 5-4, despite the Chinaman fashioning breaks of 124, 54 and 135!

Matthew Selt has been in the snooker news for probably the wrong reasons over the last few days, but he has certainly done his talking on the table at the Guild Hall as he followed up a 4-0 win on Monday with a 5-0 win on Thursday against reigning European Amateur Champion Jak Jones.

Selt was also in powerful scoring form - rattling in breaks of 56, 53, 118 and 75 in the frames before the Mid-Session Interval.

Grace made a 96 in the decider to see off Paul Davison in the all-Yorkshire derby, whilst McGill beat Brazilian Itaro Santos 5-1, meaning he has dropped just a frame throughout this new season so far. Stevens and Burden have just lost 2 each too.

Someone who is most definitely struggling in Preston is 1997 World Champion Ken Doherty. The Irishman crashed out of this year's World Open when being sunk 5-3 by Sam Craigie.

Doherty will not be in India either; in fact, he has failed to negotiate qualifying for the last 4 events.

There could be a real risk that Doherty may struggle to retain a top 64 ranking come the end of the campaign.

Thepchaiya Un-Nooh saw off fellow Thai Noppon Saengkham 5-0 with the aid of a 136, whilst Alan McManus' first outing since his Last 4 Crucible appearance also ended in a clean sweep of Egypt's Hatem Yassen. The Scot designed a 102.

Next up, starting straight away on Friday, is 2016 Riga Masters Qualification.

Written and published by Michael Day on the 3rd June 2016