Defending champion Stuart Bingham falls at the first hurdle after being ousted 10-9 by Ali Carter in one of the most dramatic of circumstances during Day 1 of the 2016 World Snooker Championship.

Given qualifier Carter's pedigree here, this wasn't exactly a surprising result, but the defeat makes Bingham the 17th different victim of the renowned 'Crucible Curse'.

​After losing the first frame, 'The Captain' gained control with a five frame winning streak including breaks of 78 and 50. Carter was poised to extend that advantage in the seventh, but missed a thin green when closing in on the snookers required stage.

Bingham pounced, counter-attacking to pinch it, before also pocketing Frames 8 and 9 to reduce his deficit to 4-5, and arguably leave the morning session as the happier of the pair.

On the resumption in the evening, Bingham levelled it after notching up a close tenth frame.

With the sands of momentum firmly in the champion's favour, Ali tuned the tables again to re-take the lead with the eleventh. He then emerged victorious from a 45 minute twelve frame on the pink, after Bingham had botched an earlier chance. Again, Ali furthered his lead with efforts of 52 & 58 to go into the mid-session interval 8-5 up.

Looking like only one winner, 'Ballrun' seemed to benefit from the break in play. He exhibited a steely and determined resolve, registering runs of 88, 68 and 113 to move one away at 9-8 - taking the front for the first time since 1-0.

But once again, Carter responded with a 102 to set up the somewhat inevitable decider.

Predictably, the last was a scrappy, edgy affair with missed opportunities, however, Carter had the upper hand pretty much throughout, and eventually sealed it on the colours.

The clusters of frames for each, and the way the tie ebbed and flowed, was evidence of how thrilling longer formats can be.

Carter preserves a very impressive record of negotiating the first hurdle here, for now, the last 10 years straight. He also swells his career head to head record with his fellow Essexman to P19 - W14 - L4 - D1.

Not since 1994 have we seen two matches reach their conclusion on the opening day; but courtesy of this format change, 14th seed Marco Fu became the first player through to Round 2 after a comfortable 10-2 victory over 2002 champion Peter Ebdon.

​Hong Kong's number 1 claimed the opener with a 81 before Ebdon squared it with a 67 of his own in the next.

Fu, a semi-finalist here a decade ago, then went on a barrage of very heavy scoring to take a 4-1 lead. From the fourth frame, he crafted consecutive breaks of 111, 138 and 84 without reply. The first of those efforts marking the 400th century of his 18 year professional career; a feat only achieved by six other players - testament to Fu's clinical touch amongst the balls.

Ebdon stopped the rot in the seventh, but Fu deposited the next to carry a 6-2 profit later on after the match was pulled one frame short due to time restraints.

On the return though, it was much of the same. Ebdon couldn't produce a gritty comeback like he did when 9-3 down at Ponds Forge earlier this week during qualification, as Marco polished off the tie with minimal fuss, adding a brace of 71's from the last two frames to his collection.

Despite winning the Gibraltar Open European Tour stop back in December, Fu has performed indifferently in the major events this campaign - quarter-final appearances at the International and UK Championships being his best so far. After his Last 4 run here in 2006, and being an ever present at the Crucible, he has not featured in a Quarter-Final since.

The 38 year old does not play again now until Thursday.

During this afternoon's session, Shaun Murphy edged a 5-4 advantage over Anthony McGill in a repeat of their Last 8 clash from 12 months ago, whilst Alan McManus turned a 3-1 deficit into a 6-3 lead against fellow Scot and practice partner Stephen Maguire 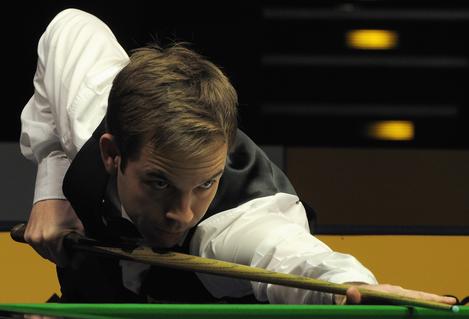