The Last 16 line-up for the 2016 World Snooker Championship is nearly complete.

​Mark Allen was the first player to emerge from Wednesday's action after he comfortably dispatched Mitchell Mann 10-3 - the only debutant in this year's event.

Northern Ireland's Number 1 came to the Crucible as a serious contender for the title, although he first had to negotiate an opponent he lost to in China Open qualifying back in February.

​Tuesday afternoon's opening session was high quality with eight breaks of at least 56 or above. Mann settled his nerves by taking frames 1 and 3 with contributions of 69 and 77 respectively before Allen went on a powerful five frame winning streak including a top effort of 104. The youngster claimed the last, however, to trail 3-6 overnight.

On the resumption this morning, 'The Pistol' wrapped up the match with minimal fuss, restricting Mann to just a total of 30 points throughout.

​Allen has won 12 out of his last 14 professional matches - he also came to Sheffield as the Players Championship winner; his last tournament outing in Manchester last month. That was his third major career title, but first in the UK.

The World Number 11 has been involved during the one table set-up here in each of the last three years (2013 Final, 2014 & 2015 Semi-Finals). Amazingly before that sequence, though, the now 36 year old hadn't been past the second round.

Hawkins never trailed in the match, although Zhang, on his third Crucible appearance, held his own in the opening exchanges.

From 3-3, the Englishman would chalk up seven of the next nine, finishing off with a tremendous 141 - the new benchmark for the £10,000 highest break bonus. Hawkins had six other half century efforts.

Without doubt, the highlight of the day would come during the evening session.

Technically another seed to be eliminated (although with due respect, certainly not a surprise) was Martin Gould, who went down 10-8 to qualifier Ding Junhui.

Ding, still China's Number 1, started the tie as the odds on favourite with the bookmakers. Despite having to qualify here for the first time since 2007, his tasks at Ponds Forge were not too taxing - dropping just seven frames in three matches. With that being nearly a week ago, he also had ample time to prepare.

The German Masters champion showed his metal in the steel city, though, as he closed out the morning's affairs by reducing his arrears to 4-5. This little rally saw breaks of 64 and 111, and was only interrupted by an 87 from Ding in Frame 8.

Gould completed the comeback with the tenth, but found himself back behind after a 53 from his rival in the next. A 53 of his own squared it once more before a 96 took him to the front for the first time going into the mid-session interval.

Now playing out to a conclusion, an incredible ending to Frame 14 helped Martin strengthen his grip.

Needing three snookers with the last red, a botched swerve attempt from Ding ultimately gifted Gould penalty points and a free ball scenario. He duly sank the extra 'red' with a black. He later laid another snooker which would eventually harvest the clearance opportunity he coolly grabbed for 8-6.

Given Ding's very well known problems and underachievements in this arena, you could have been forgiven for thinking the end would be nigh after that bitter pill. However, full credit to the 11 time major ranking winner, he would counter attack with the last four frames straight, chalking up contributions of 132, 86 and 100 in the process.

For a while in the eighteenth frame it looked as if Gould would push it all the way, but a superb pot on the last red allowed Ding to clear to pink for the victory.

With six seeds now perished, and possibly being in the more open of the two halves of the draw, will this be the year 'The Dragon' makes his maiden Crucible final?

Written and published by Michael Day on the 21st April 2016 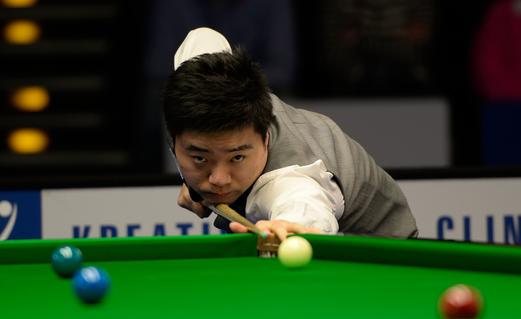