Just the final stages of the China Open in Beijing stand before the World Championship at the iconic Crucible Theatre, Sheffield starting on the 16th April.

Many changes have been made under the Barry Hearn era, but the automatic selection of the World's top 16 ranked players for the venue stages of the biggest event in the sport has remained protected and unchanged.

However, the qualification criteria has seen a massive overhaul, with all the other 128 entrants starting off at the same flat structure stage.

So, whether you are ranked 17th, or an amateur wildcard, everyone must advance through three best of 19 matches at the Ponds Forge Arena to become one of the 16 qualifiers.

Gone are the days of staggered qualifying, and right or wrong, it is essentially a tournament within a tournament that is played from the 6th-13th April.

To make the numbers add up, and bearing in mind not quite all current professionals will enter, a selection of successful amateurs have been invited to take part.

Below is my brief synopsis of each of those invites so far.

Ng On Yee, the reigning WLBS World Champion, has also been given a wildcard, but I will be writing a separate article about her shortly...

Probaby the most dangerous of all the wildcards!

One of India's best known sportspeople (yet alone Cuesports), Advani is a multi-time World Champion in various disciplines and formats.

Although on an upward trend in the World Rankings, Advani elected to resign his pro tour card for the start of the 2014/2015 campaign so he could concentrate more on his family and Billiards - his main Cuesports love.

During his brief spell on snooker's highest tier, he made the quarter-finals of both the Indian and Welsh Opens; even registering a victory over John Higgins on TV in the latter.

He has been invited to Ponds Forge because of winning the IBSF World Amateur Championship in Egypt last November. It was the second time he had won the sport's most prestigious amateur title.

​Zhao lost 8-6 to Advani in Hurghada, but looks set to become a full time professional if Advani turns his card down (which he will likely do again).

To all intensive purposes though, Zhao is already a fixture on the circuit this season due to his high finish at Q-School 2015. He has filled in for all the events where current professionals have not taken their entries.

Still just 18, he has chalked up a series of good results - making the venue stages of the International Championship and German Masters.

Another one off the Chinese production line of talent, Zhao is certainly not a favourable draw to have considering the experience he has gained over the last few months.

UPDATE - ​Zhao has accepted the invitation

He is due to play on the professional scene for at least two years from the start of the 2016/2017 campaign.

Despite the 20 year old obviously being a fantastic player (he beat Xintong, whitewashed Wang Yuchen and Jamie Rhys Clarke in a decider in the final) it doesn't appear he has yet to play in a pro competition.

Possibly an 'X-Factor' in the draw, it will be interesting to see how he adapts to the conditions.

UPDATE - ​Keattikun has declined the invitation

For a few years now, Clarke has been a well known and respected competitor on the international amateur scene. However, he has also unfortunately worn the tag of a nearly man, after a number of close misses and final defeats in big events.

Initially being an invite for this because of reaching the final of the 2015 IBSF Under 21's (see above), the 21 year-old Welshman has since lost in the 2016 EBSA European Championship final too.

He also lost in the 2015 Euro final to Michael Wild and has been within one frame of making the pro circuit via Q-School in 2014, and a match in 2013.

He does have a lot of experience playing in pro events though - a frequent qualifier for the main rounds of many European Tour stagings.

Clarke can boast wins over Ben Woollaston and Luca Brecel, and only lost 10-7 to Ryan Day in World Championship qualifying last year.

UPDATE - ​Clarke had accepted the invitation

Incredibly, next season will be the 22 year-old's third separate stint on the main tour!

However, only 12 months ago, whilst still as a pro, he beat Aditya Mehta and Jack Lisowski to move to within one victory of the Crucible Theatre. He was also level 6-6 with Ryan Day in the last qualification round before going down 10-6.

UPDATE - ​Jones has declined the invitation

Republic of Ireland's Boileau is the current EBSA European Under 21's Champion - also won in Wroclaw, Poland during February.

It will be his first World Championship appearance, although he has plenty of experience navigating through the amateur rounds of European Tour events over the past couple of seasons.

UPDATE - ​Boileau has accepted the invitation

​The 18 year old Englishman was runner-up to Boileau.

Another World Championship debutant, he too has gained knowledge of the tour via the Euro events.

​He had an impressive 4-2 success over Dave Gilbert at the Gibraltar Open earlier this season.

UPDATE - Sargeant has accepted the invitation

Another cueist from Wales, Rees claimed the inaugural EBSA European Under 18's title in Poland too.

​It appears he has just played in one Euro Tour back in 2013.

UPDATE - Rees has accepted the invitation

This promising 18 year old from China recently won the Asian Under 21's Championship in Colombo, Sri Lanka. By virtue of that title, he will compete on the main tour full time from next season.

He has featured in professional events before; a familiar wildcard for many of the events in his homeland. Back in 2013 he defeated Joe Perry in the Shanghai Masters, whilst Aditya Mehta was eliminated from this season's International Championship.

UPDATE - ​Wang has declined the invitation

​Thailand's Yotharuck was runner-up to Wang in Sri Lanka after being ousted by a deciding frame in the final.

Despite being just 20, he has already had a couple of years as a professional - ultimately unsuccessful though, and being relegated from the circuit at the end of last season (2014/2015).

​He did however beat Graeme Dott on his way to reaching the last 32 of the 2013 Indian Open.

UPDATE - ​Yotharuck has declined the invitation

UPDATE - Cheung has accepted the invitation

UPDATE ON THE 2nd APRIL

World Snooker confirmed which of those above chose to accept their invitations.

All previous World Champions who are not eligible / active were also invited, although only Steve Davis (who is technically part of the tour as a wildcard anyway) will be part of the Ponds Forge qualifying.

The remaining positions have been determined through the EBSA European Tour list from earlier on in the season. This is a ranking list for how well the amateurs did in the six ET events during the 2015/2016 campaign.

Preference has been given to the 'Home' nations, and countries who have hosted World Snooker events. Places were restricted to one per those countries.

Former professional Miah is set to return to the full-time tour next season due to being in the top 8 ET Order of Merit for players outside the World's Top 64. He has had a terrific and consistent season, even knocking out Judd Trump during the Ruhr Open.

Hirani is another player who has frequently reached the professional rounds of ET events, as is Poland's Baranowski.

​Craig only entered the Gibraltar and Gdynia legs, but impressively got Last 32 and 64 finishes respectively in each, also beating Mark Joyce and Oliver Lines along the way.

Young German prospect Kleckers featured in 2015 qualifying; since then he has claimed a semi-final finish at the World Amateur Championship in Egypt. 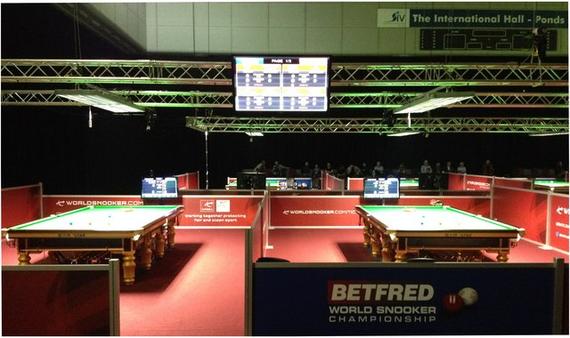