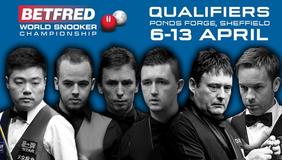 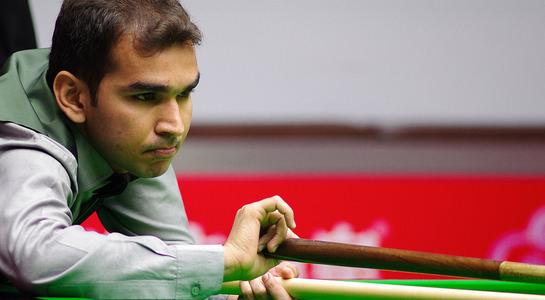 AWESOME AKBAR KEEPS UP WITH THE JONES

Akbar gained a two year tour card courtesy of his Asian Championship win in Malaysia last April. Despite running players close during tournaments this season, including Mark Williams 6-4 at the UK Championship, today was his first win on the circuit. It earns the 22 year old a guaranteed £6,600 payday.

Jones took the opener, but Akbar claimed seven of the next eight to take a 7-2 advantage going into the evening's last session. He extended that to 8-2, and although the Welshman closed the gap to 9-4 (also making a 125 break in the eleventh frame), the outsider got over the line.

Akbar is now just two more victories away from becoming the first ever player from the Asian Subcontinent to feature on snooker's biggest stage.

In the Second Round he will face Ian Burns; who is looking for his Crucible debut too, after he fended off a mini comeback from Duane Jones to win 10-8. Burns made a total of five breaks over 50 in the match, as he turned a 4-2 deficit into an 8-4 lead.

Also in this qualification section is Peter Ebdon. The 2002 champion will fancy his chances of appearing at the final stages for the 23rd time in his career, but first since 2013, after he dispatched fellow veteran James Wattana 10-6. Both made a century.

The highest ranked player to fall on Wednesday was Ben Woollaston, who was victim of a fantastic recovery from World Number 83 Chris Wakelin, who ousted the tie 10-9 in a late night thriller.

Woollaston has been a model of consistency this season, and he looked like picking up more prize money when establishing a 9-7 profit. Earlier in the evening he had made a 131.

​But Wakelin restricted his opponent to just a total of 36 points from there on in, as he chalked up the last trio of frames (and a 107 in F18) for a notable success. This will be his weightiest cheque of the campaign so far too.

The only other deciding frame finish of the day saw 1995 runner-up Nigel Bond squeeze past Andrew Higginson. It was a match with contrasts, as the veteran, who is well known for coolness under pressure, lead 3-0, but also trailed 8-6.

The remaining fixtures went the way of the 'higher seed'.

​Scotland's Ross Muir put himself in line for a potential shot at Ding Junhui next when he dismissed Sean O'Sullivan 10-5, whilst in that same quadrant, 2015 China Open finalist Gary Wilson relatively eased past Leo Fernandez 10-4. Wilson will next tackle Bond.

Anthony Hamilton's tour survival hopes hinge on the outcome of this event, but the 25 year professional gave his chances the world of good with a comprehensive 10-3 victory over Sydney Wilson.

Hamilton went 4-0 up with the aid of 51, 80 and 73 runs before Wilson kept in touch with the next three. However, the two time major runner-up would then win six on the spin, including contributions of 104 and 54.

Anthony has shown some real form since the turn of the year and cannot be discounted making a return to a venue he hasn't played at since, incredibly, 2008.

Mark Joyce is the second highest ranked player in the World (only behind Thepchaiya Un-Nooh), never to have been introduced at the Crucible, but he too is just a brace of hurdles away after seeing off Zak Surety 10-7.

​Joyce had lead all the match until Surety got level, and then stuck his nose in front for the first time at 7-6. However, one of this season's German Masters quarter-finalist's stopped the rot and notched up the last four frames in a row. He began that sequence with a 106; the highest break of the encounter.

Robbie Williams has been some what of a master in qualification of recent times, having been ultimately successful in the last two years. He started his bid for a hat-trick with a 10-7 win against Gareth Allen.