It was a hectic day's action at the Ponds Forge Arena, as 22 First Round ties in 2016 World Championship Qualifying reached their conclusions.

Putting nostalgia and history aside, the clash of the day involved the deciding frame finish between 'People's Champion' Jimmy White and Gerard Greene, who had to win to stand any chance of surviving relegation from the professional tour.

Like all of this afternoon's ties, the pair were returning after their opening session from Wednesday; where Greene won the last trio of frames to take a 5-4 overnight advantage.

On the resumption, Greene extended his lead, but White managed to draw level at 6-6 and then 7-7 before going in front and then winning Frame 16 on a re-spotted black after being 69-0 down.

But 'The Whirlwind' and his legion of fan's ambitions of a return to the Crucible for the first time since 2006 where extinguished when Greene rounded up the last three frames for a 10-9 victory that puts him provisionally back into the World's Top 64.

Jimmy's 36th consecutive attempt at that elusive maiden World Title may be over, but he will return next season as part of a guaranteed two year tour card.

China's 2015 World Amateur runner-up Zhao Xintong ousted Rod Lawler in the session's other nineteen frame thriller. The promising 19 year old notched up a 123 as he recovered from falling 6-2 adrift against his vastly experienced opponent.

Cheung had perhaps threatened his experienced opponent problems when leading 2-1 in the early going, but the Englishman chalked up nine of the next ten for a comfortable victory. Milkins had a best effort of 103 in Frame 9.

Another Hong Kong wildcard into this event was 2015 World Ladies Champion Ng On Yee. Despite her stay in Sheffield ultimately being a short one, she did avoid the dreaded whitewash to Peter Lines when claiming today's first frame after suffering a 9-0 session clean sweep yesterday.

Lines remained professional throughout the contest, in his 10-1 success. It keeps the 46 year old's slim hopes of surviving relegation from the professional circuit alive. He also put himself in line for an added bonus, after crafting a 142 total clearance - the highest of this non-TV stage so far.

But Wild, the 2015 European Amateur Champion, made himself more than just a nuisance when reeling off the opening six frames to not only make the scoreline look respectable, but seriously threaten the mother of all comebacks. A relieved Holt eventually dragged himself across the line in the sixteenth.

Although never having been in the World's Top 16, Holt has been a frequent qualifier for the Crucible in recent years - he's made it 7 out of his last 11 attempts.

​2006 World Champion Graeme Dott was put through the ringer by amateur Brandon Sargeant; sneaking past 10-8.

Dott, who was also the runner-up in 2004 & 2010, could never establish more than a two frame cushion between himself the Euro Under 21's finalist wildcard. When looking like a deciding frame was on the cards, Dott counter attacked with a match-winning 103.

Without claiming a trophy, or reaching a final, the Scotsman has been exceptionally consistent this campaign; qualifying for the venue stages of every major event he has entered.

​Li Hang won the keenly contested Chinese derby over Lyu Chenwei 10-8. It was a high quality affair between the 25 year old's who each made a brace of centuries, and a hat-trick of 50plusses. Hang was even on course for a 147 before missing a tricky mid distance yellow on 120.

The 11 other fixtures were completed in just one day with sessions in the morning, and then the evening.

Matthew Stevens seems to save his best game for the longer race distances, and he wasn't too long engaged beating off the efforts of Josh Boileau (Euro U21's winner) in a 10-2 success. The two time runner-up rattled in a 114 and 110. Boileau did stave off the whitewash however, claiming back to back frames for 9-2.

Another Welshman to coast through was Ryan Day, who beat fellow countryman Daniel Wells by the same scoreline, in the outstanding performance of the round so far.

Wells himself made a 127, in what was a remarkable match.

​Jimmy Robertson wasn't far off from that standard either as he crushed Tyler Rees 10-0 - the only such score of qualifying so far. Two times a qualifier for the Last 32, Robertson drilled in nine efforts of 50 or more, two of which were tons.

The highly rated, and somewhat underground, 21 year old has had his short career blighted with visa issues, but only at the start of this season he won four straight matches to qualify for the Australian Open. He is a player whose amateur career I have followed, and someone I believe who has a very bright future ahead of him.

Thepchaiya Un-Nooh, at 35 the highest ranked player in the world never to have appeared on snooker's biggest show, was surprisingly taken all the way by fellow Thai Akani Songsermsawad - aka 'Sunny'.

Songsermsawad is registered as a professional courtesy of his 2015 Asian Under 21's title, although this was his first outing on the highest tier of the sport (apart from the 6-Reds Championship). He acquitted himself very well, including his maiden pro century with a 105, but was just squeezed out by his quickfire counterpart.

20 year old Zhang Yong from China caused the biggest shock of the evening when dismissing 2000 and 2001 semi-finalist Joe Swail 10-7.

Before today's encounter, Zhang had recorded just a total of three wins on tour all season.

In fact, Swail and Pengfei were the only 'seeded' players from this batch of matches to be expelled, although Stuart Carrington was forced to come back from 9-7 down against Hammad Miah to avoid joining that particular club.

Carrington unfortunately missed out at the China Open in Beijing last week due to illness, but breaks of 105 and 100 hopefully prove he is back to full fitness in his bid for a second consecutive Crucible display. 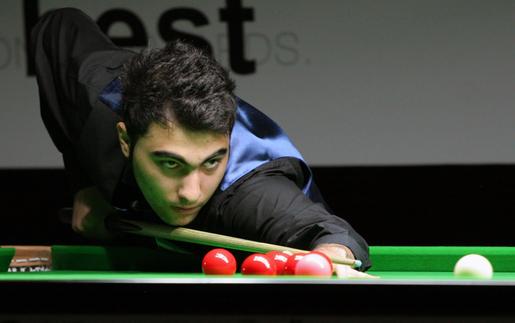