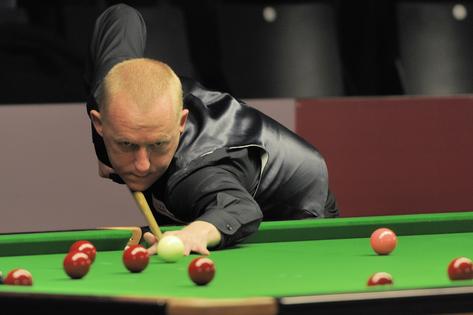 FIRST ROUND NEARS ITS COMPLETION

There was a distinct international feeling to World Championship Qualifying on Friday with 15 different nations from 4 continents represented at the Ponds Forge Arena. However, it would be the UK based and more established stars that would enjoy the success.

It was an emphatic win for the experienced Welshman, who posted a top effort of 128 in the eighth frame. The 40 year old is attempting to reach the Crucible for the fourth time; his last appearance was in 2004. Back in 1997 he reached the Quarter-Finals.

It was a tough school for youngster McCormack, who registered four points or less in five of the ten frames.

Not far behind joining Walker in the winners enclosure were Anthony McGill and Jack Lisowski, who both also enjoyed comprehensive victories.

Last year, McGill wrote the early Crucible headlines with his run to the Last 8 on debut; eliminating Stephen Maguire and then defending champion Mark Selby. The likeable Scot is just two more hurdles away from a return after a 10-1 victory against current African Snooker Champion, Hatem Yassen (Egypt).

​McGill, who has yet to reach the Last 16 of any ranking event this campaign, constructed a 102 during a comfortable task where he only dropped Frame 6.

Completing the quartet of players to advance within an hour of the evening session starting was Liam Highlfield, who was the victor by the same scoreline over Luke Simmonds.

​Highfield virtually ended the fixture as a contest when chalking up an 8-0 lead; crafting a 120 in the process (missed the yellow on the max!). Simmonds avoided the dreaded whitewash, but Liam soon enough put the finishing touches in Frame 12. It keeps his hopes of surviving main tour relegation in his own hands.

​Another hopeful to waltz through 10-2 was Tom Ford; who is now guaranteed to earn double more money this season than what he did last.

August's Riga Open finalist totted up five breaks of 72 or more (best being a 105) in his defeat of rookie Isle of Man professional, Darryl Hill.

Despite ultimately being eliminated, other foreign entries today put up very spirited displays in their losing endeavours.

Thor Chuan Leong, Malaysia's only current professional, has struggled in major events this season, although courtesy of a fantastic European Tour campaign - which saw him finish 31st in the Order of Merit, he is guaranteed a fresh two year tour card after this tournament.

In probably the day's highest quality affair, Thor went 3-0 up on opponent Sam Baird with efforts of 76 and 66 before the classy World Number 59 instantly struck back with 80, 56 and 60 to draw level.

The Asian re-took the lead with a 107, but Baird squared again with a 50, and then went in front for the first time going into the evening.

The pair continued to trade frames (TCL - 61, SB - 58), but the favourite sneaked a close looking fourteenth for an 8-6 two frame advantage. Leong scored a 56 to keep in touch, but that was cancelled out with a 100 by his rival for 9-7. The Malaysian moved to within one again, but a 52 aided Sam for a very hard fought 10-8 win.

A more famous and successful player from the continent is Belgian Luca Brecel; February's German Masters and Snooker Shootout runner-up.​ The 2012 qualifier had to exhibit his fighting qualities when falling 7-4 adrift of the World Number 101, Steven Hallworth; who had breaks of 70 and 86 getting that lead.

​But Brecel rattled in a trio of half centuries during a five frame winning streak to move one away, and sealed the deal before the need for a decider.

Yu De Lu and Paul Davison (pictured, above) were involved in the day's only deciding frame finish, which Davison just shaded 10-9; taking three of the last four.

​The 44 year old's previous 19 attempts to feature on snooker's grandest stage have failed; could this be the year for 'Snowy'?

The £6,600 he pockets today is his highest individual payday from the sport. He is also the only 'non-seeded' player from Friday to progress.

There were also wins for David Gilbert (made 115 and 114 breaks) and Craig Steadman.

Today's afternoon first session ties will resume on Saturday to a conclusion. They too produced some one sided scorelines against the overseas underdog contingent.

The other seven meetings all seem to be fairly active though, with deficits of no more than three frames.

Written and published by Michael Day on the 9th April 2016