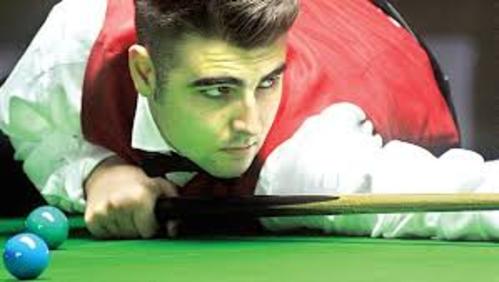 The first round of qualifying for the 2016 World Snooker Championship is now complete. 64 players remain, all just two more wins away from appearing at the Crucible Theatre.

Saturday afternoon's session saw the resumption, and conclusion, of the matches that had got underway 24 hours earlier. There were comfortable wins for many of the sport's more established stars against the lesser known overseas contingent.

China's Cao Yupeng put the finishing touches to a 10-0 drubbing of Latvian wildcard Rodion Judin; the third whitewash result in as many days at the Ponds Forge Arena.

Brazil's Igor Figueiredo has shown some real pedigree at this venue in qualification before, but this time around he was outclassed 10-2 by World Number 23 Matthew Selt - who is trying to feature on the main stage for the third time in the last four years.

2008 & 2012 runner-up Ali Carter is on course for a 14th consecutive Crucible bow after seeing off Polish amateur Mateusz Baranowski by the same 10-2 scoreline too. The underranked Carter rattled in efforts 111 and 130 during his comprehensive success.

Bulgarian underdog Bratislav Krustev was also consigned to the same fate against Zhang Anda (China), who had a top contribution of 111.

​Should Pinches not enter and be successful at Q-School next month, it may bring a 26 year career over two spells within the highest tier of the sport to a close.

World Seniors title holder Mark Davis was involved in a high quality affair with amateur Adam Duffy. Davis managed to progress 10-7 in an encounter that witnessed 13 breaks of 50plus or more - 7 of which were from Duffy.

Popular Thai Dechawat Poomjaeng saw off Eden Sharav 10-4, both had a century each - Poomjaeng's was a 134, whilst Oliver Lines notched up a 104 in his 10-5 victory over Lu Ning; a huge win for his top 64 end of season bid.

There was also dual session action on Saturday with matches starting in the morning and then being completed later in the evening.

​Welsh wildcard Jamie Rhys Clarke (pictured above) became only the second amateur (Zhao Xintong is the other) to advance to Round Two after he ousted the experienced Jamie Burnett 10-9.

Clarke, who has been agonisingly close to qualifying for the main tour on multiple occasions, held his nerve with a fantastic 62 break in the decider.

Veteran legends Steve Davis' and Tony Drago's 2016 World Championship hopes were extinguished at the first hurdle after going out to Fergal O'Brien and Alfie Burden respectively.

Davis, now technically competing as a part-time amateur, shared the opening four frames of his tie with the Irishman, but later faded away as the former British Open champion claimed eight of the last ten. O'Brien had five breaks of 75 or more.

Quickfire Drago was trying to reach snooker's biggest stage for the first time since 2005, and for a while held his own with Burden; the pair were level at 4-4.

But last week's China Open quarter-finalist went on a four frame winning spree with runs of 59, 65, 112 and 88 to forge a cushion which he would pretty much maintain for a 10-7 victory.

Will this be the last time we see Davis and Drago play on the main tour? I for one certainly hope not, I believe they deserve a better send off than this.

Recently demoted from the World's elite Top 16 and forced to qualify for the first time since 2007, Ding reacted well with a comfortable 10-4 win over a very game Greg Casey (Rep. of Ireland).

Ding pretty much controlled the match from start to finish and never appeared to be in trouble. He chalked up a series of breaks - a couple in the nineties.

Next up for Wenbo is Jamie Cope, who ended the ambitions of amateur Ashley Hugill 10-4.

Mark King went 8-0 up on Fraser Patrick, eventually finishing it off 10-3 (King made a 108), while Xiao Guodong became the third Chinaman of the session to go through after dispatching Allan Taylor 10-6.

Martin O'Donnell turned around a 7-8 deficit into a 10-8 win over Kuldesh Johal, and Mike Dunn concluded a late night slow burner against James Cahill 10-7 to become the last name into the Last 64.

In total, of the 64 matches played out over the last four days, just 10 of the unseeded players went through. However, of the 22 represented nations at the start of the campaign - just 12 remain.