The Second Round of Qualifying for the 2016 World Snooker Championship got underway Sunday at the Ponds Forge Arena. Come the end of the evening session, 11 more Crucible dreams were extinguished.

It would be a thrilling day's action with break building brilliance a common feature in most of the matches. None more so than Jimmy Robertson's brutal 10-5 victory over Stuart Carrington.

Robertson followed up his opening round 10-0 whitewash of amateur Tyler Rees with yet another display of clinical scoring amongst the balls. The two time Crucible qualifier rattled in runs of 82, 96, 136, 75, 82, 51, 73, 106 and 122 - a near maximum 147 effort which broke down on the green. When you consider he had very similar figures a few days ago (2 centuries and 7 half centuries), the 29 year old has probably put in the best two individual performances of the week so far.

2006 World Champion Graeme Dott was once again made to work hard as he chalked up his second 10-8 scoreline of the process; this time over Thailand's in form Noppon Saengkham. Only ten days earlier Saengkham had comprehensively knocked Dott out of the Last 16 in the China Open.

The clash started off at a blistering pace with Dott banging in a 121, only to get a 104 response from the underdog (another failed maximum attempt of the week, though!). The next two were also shared, but after the mid-session interval, the Scot went on a six frame winning streak to seemingly be coasting through.

However Saengkham, who rose to a career high 82nd in the World Rankings courtesy of his maiden major quarter-final appearance in Beijing, chalked up contributions of 134, 75, 98 and 88 in totting up five on the spin of his own, and reducing the deficit to 8-7.

But a dogged Dott managed to eventually get himself over the line in a repeat scoreline of his success against amateur Brandon Sargeant a few days previously.

Whilst there were a few worthy contenders, the award for the best comeback of the day must go to Anthony Hamilton, who had to win the last four frames of his clash with Chris Wakelin to advance.

​The experienced 44 year old, who is looking to return to snooker's biggest stage after an absence of eight years, had a horrible start when falling 4-0 down. This would progress into a 9-6 score, putting Wakelin within a frame away.

At the point of no return, Hamilton reacted, crafting breaks of 78, 99 and 69 to complete a superb turnaround. Wakelin was restricted to just a total of 22 points throughout this spell. Anthony's largest effort was a 100 in Frame 10.

Kurt Maflin also recovered from being a quartet of frames down against Chinese amateur Zhao Xintong.

Maflin has had a pretty poor season up until now with just a solitary Last 16 outing from all events. The £9,900 he is now guaranteed is his weightiest payday of the campaign.

Besides the actual World Championship itself, being the last tournament of the season means the confirmation of tour survival or relegation for a whole host of anxious professionals. Two players who have had that latter fate forced on them today were David Morris and Peter Lines.

McManus is now just one more hurdle away from a fourth consecutive bow on the main Sheffield stage. Prior to this exceptional qualification form, the former Masters Champion hadn't featured since 2006!

Should Lines want to continue a 22 year playing career on the highest tier of the sport next season, then he will have to emerge victorious at Burton's Q-School next month. The 46 year old saw Michael Holt turn a 7-6 negative into a 10-7 win.

Continuing the theme of high quality were Robert Milkins and Scott Donaldson, who each recorded a brace of centuries during Milkins's 10-8 success; he had lost the opening trio of frames.

1995 finalist Nigel Bond exhibited his burning desire when breaking free from 6-6 to claim a 10-6 win over Gary Wilson. He could potentially meet the highest seed possible, Ding Junhui, in the final qualifying round. Bond last played at the Crucible in 2009.

Ian Burns ended Pakistan's Hamza Akbar's ambitions with a comfortable 10-3 glory, and Robbie Williams is still on course for a World Championship consecutive hat-trick after an impressive 10-4 dismissal of Mark Joyce.

Written and published by Michael Day on the 11th April 2016​ 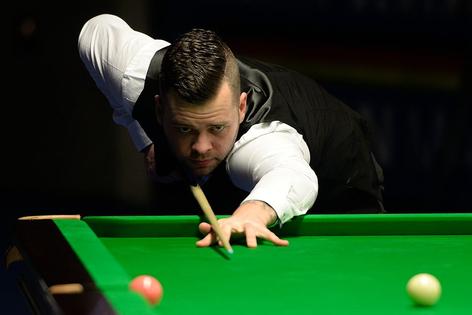