Just 32 players remain in the race for the 16 Crucible qualifying spots after the penultimate round was completed at Ponds Forge on Monday (and a little bit into Tuesday!)

The most remarkable outcome of those 22 ties was 2002 World Champion Peter Ebdon's sensational 10-9 late night, comeback victory over Gerard Greene.

Greene, who himself recovered to oust Jimmy White in the First Round, went 2-0 down, but despite only making a top break of 50, proceeded then to go on a remarkable eight frame winning streak. Ebdon stopped the rot with the eleventh, but Greene moved one away with the next.

​At 9-3 down it looked all over for the experienced 45 year old, however, in a clash that finished just before 2am, Ebdon chipped away at the deficit and forced a decider.

The nineteenth and final frame was predictably an edgy and nervy affair. With Greene previously showing signs of distress and anger at losing such a commanding advantage, he competed well, although it was Ebdon who made sure of a colossal turnaround by nicking it on the colours.

Not only does the loss end his World Championship campaign, but it also relegates Greene from the professional tour, having ended outside the World's Top 64. Should he not enter and be successful at Q-School in Burton next month, it would bring to a close a straight 23 year playing career on the sport's highest tier.

Another master of brinksmanship was Ryan Day, who shifted a 9-5 disadvantage into a 10-9 win against Alfie Burden - it would be the only time in the tie the Welshman had led.

Burden, a quarter-finalist at the recent China Open, constructed eight breaks of 50 or above (best being a 109), but saw his chances limited in the closing frames as Day, who had a 104 in the eighth, finished things off with a 64 in the decider.

​The three highest world ranked players having to qualify all progressed to the final round with relative comfort.

Underranked, two time runner-up Ali Carter was made to work very hard against Cao Yupeng; although efforts of 111 and 54 from 8-8 put him through a 10-8 victor.

At number 35 in the world, Thailand's Thepchaiya Un-Nooh is the highest profile player never to have played on snooker's grandest stage. But he kept his hopes alive of a debut after eliminating a very dogged Paul Davison 10-8; Un Nooh never had the front until 8-7.

There were defeats for top 32 stars Matthew Selt, Luca Brecel and Mark Davis who bowed out to Mitchell Mann, Liam Highfield and Zhang Anda respectively.

At 74th in the rankings, Mann is the second lowest player to feature in the last round. He made a 100 earlier on, and claimed the last three frames for an impressive 10-9 win. The guaranteed £9,900 is his largest payday to date.

Speaking of big breaks in a losing cause, Iran's Hossein Vafaei Ayouri notched up a 138, but would ultimately finish on the wrong side of a 10-7 scoreline to 1997 King Ken Doherty.

Oliver Lines had a professional career personal best too with a 139, although his ambitions of qualification were extinguished by Dominic Dale 10-6.

China's World Cup winning team member Zhou Yuelong looks a serious contender for even more major honours in the future. The 18 year old's Crucible bid is still on track, though, after a 10-6 victory over Fergal O'Brien. (Yuelong 104 & 137 / O'Brien 107).

Another Chinaman to advance was Xiao Guodong. He started off with a 133, eventually getting the better of the last surviving amateur, Jamie Rhys Clarke, 10-8.

In form Mike Dunn played on the main stage back in 2002; the only time in 24 previous attempts he had achieved qualification. However, he is now just one more hurdle away from a return after squeezing past Li Hang 10-9.

After their opening session was delayed due to a light failure on the table, last year's Quarter-Finalist Anthony McGill resisted a comeback from Craig Steadman in being a 10-9 victor.

McGill deposited seven breaks of 50 or above (best of 101) in creating a 9-5 lead, only to see Steadman inch his way back.

​The Scot eventually got over the line in the last 63-30. 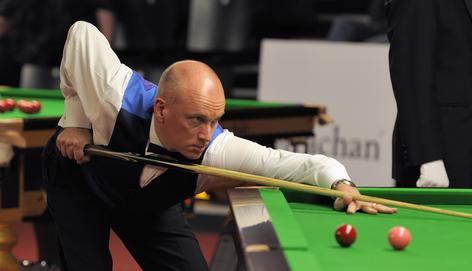