The Quarter-Final line-up for the 2016 World Snooker Championship is now complete. It features just 2 of the top 8 seeds, and an average age of nearly 36.

Pre-tournament favourite Ronnie O'Sullivan's dreams of a sixth World Title were dashed when he was ousted by a very impressive Barry Hawkins 13-12 in the match of the event so far.

Hawkins' record here over the last few years has been exceptional, with two of those runs being ended by 'The Rocket' (2013 Final, 2014 Semi-Final). He was, however, also battered 10-1 in the Masters Final in January, and had only beaten his fellow Englishman once before - and that was 14 years ago!

That perhaps makes his success on Monday night even more significant. Either way, he thoroughly deserved his win, which saw him craft a top effort of 102. He also capitalised on his rival's errors when in commanding positions; counter-attacking to really hurt O'Sullivan.

The standard of the first five frames was high quality, a theme that pretty much lasted throughout. Ronnie led 3-2, but with Barry notching up the next three, it would be the last time the heavy odds on shot would be in front.

O'Sullivan closed to within striking distance a few times, but Hawkins remained resolute and stubborn. Eventually, the underdog carved out a 12-9 lead (the only time a three frame gap occurred since 6-3).

Just one away from the exit, 40 year old Ronnie exploded into action. Contributions of 124, 88 (failed maximum attempt) and 63 dramatically forced the tie all the way.

But after a protracted safety battle which resulted in the frame going scrappy and balls up in baulk, the World Number 11 sunk a tricky red and constructed a valuable 56.

Egged on by the audience, ROS did return to a very unfavourable set-up. For a short while, he maybe harboured hopes of one of the greatest clearances of all times, but an in-off virtually ended his stay in the last chance saloon.

Huge credit to Barry, who must have feared the worse with his opponent's comeback.

Despite losing, O'Sullivan extraordinarily posted 12 breaks of over 60 - 4 of them being centuries! I think his main downfall was losing a number of frames when only a few balls away from the snookers required stage.

In his post-match press conference (which he turned up for this time!) he was slightly emotionally, but courteous and upbeat. He did claim that he'll be here next year.

​Ronnie might be gone, but another fortysomething still enjoying the party is John Higgins. He will join fellow quadragenarians Alan McManus (45) and Mark Williams (41) in the next round after seeing off Ricky Walden 13-9.

The four-time winner never trailed in the match; taking both opening sessions individually 5-3 for a 10-6 lead overall. He would finish the job quite comfortably in the end. Both registered three figured runs.

​With the demise of O'Sullivan, and considering his form of the last 15 months, Higgins will be the favourite in many people's eyes. He's been there and done it before. I believe he has also won more major ranking event matches than anyone else this season.

Perhaps an interesting note too, the last three times John has reached the quarters here before, he has gone on to lift the trophy. Omen?

​Ding Junhui got a measure of revenge for a brace of recent Crucible defeats by extinguishing Judd Trump's hopes 13-10.

The pair had met during the Last 8 stage in 2015 (in fact the last time they'd clashed altogether). The opening session here was a perfect opposite of twelve months previously, with the Chinese 'qualifier' forging a 6-2 cushion.

It was an advantage that he would nurture throughout without necessarily hitting top gear; Trump being made to pay for some extravagant and ill-advised shot selections. Ding was resourceful.

The four frame profit was maintained come the conclusion of the second session, and with the first four frames of the third shared, Ding was one away at 12-8.

At the point of no return, Judd threatened an unlikely comeback by reducing his arrears to 10-12 - but it was to no avail.

Both players had a century in Session 1. DJ had 6 other half centuries, JT had 7.

Neither have won snooker's biggest prize (yet), but Trump will surely have to claim the trophy sooner or later if he is to create a long-lasting legacy within the sport; something that was expected early on in his junior / amateur days.​

​Despite Ding's well publicised troubles in this event, it will be his third QF appearance in the last four years - not bad going at all. It is also his fifth straight victory after negotiating three rounds of qualifying at Ponds Forge a fortnight ago.

The last player to make up the trio of qualifiers remaining (along with Alan McManus) is Kyren Wilson, who was involved in an unusual patterned match with the in-form Mark Allen.

The World Number 19 sensationally went 7-0 up before the recent Players Championship winner got on the board with the last of Sunday morning's play.

​Returning later that night, Allen then went on a scoring streak with consecutive breaks of 122, 103, 60 and 66 to chalk up all the frames from that mini-session and make it just 7-5. But keeping up the theme of batches of frames, Wilson somehow managed to follow suit with the next four to reassert a six frame profit.

Almost unbelievably, Allen rallied once more at the start of the deciding act to close within two again (9-11), before the 24 year old (youngest hopeful left in by five years), coolly polished up Frames 21 and 22.

​Wilson beat the Northern Irishman on route to his maiden professional title of any sorts last September, the Shanghai Masters. Could history repeat itself?

Certainly, his next obstacle - World Number 1 Mark Selby, has not been 100% during this campaign so far. Wilson will certainly fancy the job of eliminating him.

The youngster also seems to possess the attributes needed to last the course. 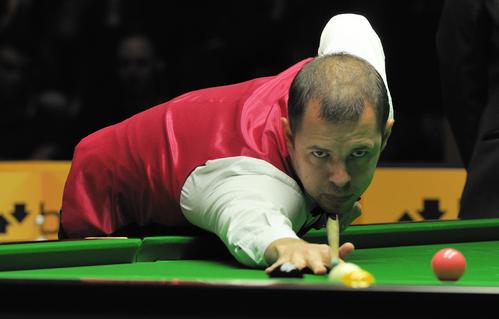