An unlikely quartet of players remain at the Crucible Theatre, although all four of them have performed on the one-table set-up before; albeit, some more recently than others!​

Despite being the World Number 1, no one really still knows what frame of mind Mark Selby is in having missed the Players Championship and China Open beforehand due to personal problems.

I'm not too sure of what his own personal expectations were at the start of the event; his early wins against Robert Milkins and Sam Baird were a bit unconvincing at times.

However, the realisation of other certain big names departing the tournament has maybe released the opportunist in Selby - I was personally impressed how he tamed a confident Kyren Wilson 13-8 in the Quarter-Finals.

Unsure of his form, Selby began his bid at 10/1 with the bookmakers; he hadn't been that long for a while.

He is the only player remaining who has lifted this trophy before, it is also his fourth appearance at this stage since 2007.

Talking of decades, it was 2006 the last time Marco Fu had the Crucible to himself, like he does know.

The Hong Kong star has had a fairly average second half to the season, though he did claim the Gibraltar Open back in December.

His recent record here was not too promising either, since his best run back in '06, the 38 year old hadn't been past the Second Round even once.

But wins over Peter Ebdon (10-2) and Anthony McGill (13-8) helped him push that barrier, and with the unexpected dismissal of Ronnie O'Sullivan in R2, the third quarter in the draw was within his grasp.

Marco exhibited great bottle in surviving a ferocious comeback bid from Barry Hawkins yesterday. Fu was coasting at 9-1 up, but somehow his opponent got to within striking distance at 10-9 and 12-11.

Fu made two of the greatest clearances you'll ever be likely to see in Frames 20 and 24, considering how scrambled his head must have been in a situation of much despair.

He will be a totally different task for Selby, who has yet to meet a top 16 player in the competition.

Selby does have a dominant head to head personal record at 11-4, and also won their only previous longer distance clash during the 2007 UK Championship.

Putting in to context how crazy some of the results have been so far, we have a qualifier v qualifier meeting in the form of Alan McManus and Ding Junhui emerging from the top half of the draw.

After falling outside the elite top 16 by virtue of his First Round exit in Beijing, Ding has shown character and determination in getting this far.

He swept aside his opposition at Ponds Forge, dropping just a total of 7 frames in the process. Then he came through a very competitive segment of the draw with victories over Martin Gould, Judd Trump and Mark Williams. His 13-3 success against Williams being so large it afforded him a day off on Wednesday.

Given his well documented troubles at this venue, it may be surprising to know it was Ding's third time in the Quarter-Finals in the last four years. However, he has only been involved in the one table set-up once before (2011), where he was ousted 17-15 by Trump in an absolute epic encounter.

With a lot more space between the playing environment and the crowd, I believe this will most certainly suit China's Number 1.

The story of the tournament must surely be Alan McManus, who at 45 is the oldest World Championship semi-finalist since Ray Reardon in 1985.

The turnaround in fortunes for the 1994 Masters winner has been remarkable. Having slipped down the rankings, the Scot failed to qualify for the Crucible for six straight years between 2007-2012 - however, he has since made it through each time after.

McManus was fairly comfortable in qualifying, dropping no more than six frames in any of his three matches, before enjoying stage wins over friend Stephen Maguire 10-7, and then Ali Carter 13-11 after being behind most of the tie.

It was a similar story in his QF affair with another close compatriot, John Higgins. Returning from the last mid-session interval of the match 11-9 down, 'Angles' produced sterling snooker during a four frame winning streak for a 13-11 win. Again, a long shot at the start of the match, most expected an in form Higgins to stop him, although it was a repeated outcome from their Round 1 fixture here in 2014.

A quarter of century on from his debut, Alan will be appearing in the semi-finals for the first time since 1993 - a staggering 23 years ago!

Like Fu, neither Ding or McManus have reached the final before, so despite their many, many years on the circuit, the stakes have arguably never been higher for them.

Written and published by Michael Day on the 28th April 2016 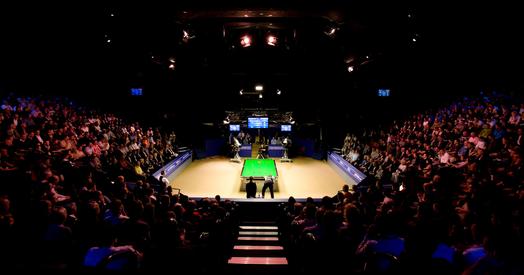