The first qualifier through to the Crucible was the highest ranked player involved at Ponds Forge; Ding Junhui.

​Ding virtually ended the match as a contest yesterday after going 8-1 up with contributions of 91, 137, 65, 98 and 53. On the resumption this morning, he also rattled in a 140, and although Bond prolonged the meeting by claiming the eleventh, China's Number 1 sealed the deal on the black in the next. It will be his 10th consecutive appearance on the main stage.

I have been very impressed with how Ding has reacted to qualifying this week after being ousted from the World's Top 16 partly due to a First Round exit at the China Open. It may have even perversely done him some good.

During his three match campaign he dropped just a total of seven frames, and was never really in trouble. He should have plenty in the tank for a possible 17 days stint.

All eyes will now be on which seed he gets in tomorrow morning's draw. The last time Ding qualified for the World Championship in 2007 (the only previous occasion, and last time he had to qualify) he came up against Ronnie O'Sullivan, whom he lost to 10-2.

Not long following Ding into the Last 32 was veteran Alan McManus; who surprisingly had a comfortable 10-2 success over Jimmy Robertson.

25 years on from his debut in Sheffield, 'Angles' initially opened up a 5-0 lead - which then progressed into a 7-2 overnight cushion.

This morning, he duly chalked up the first trio of frames to assure himself of a fourth appearance on the spin; remarkable when you think before this sequence, he had failed to make it there for six straight years since 2006.

David Gilbert has enjoyed his best season as a professional so far, and the International Championship runner-up will finish it at the Crucible after he eliminated Jack Lisowski 10-7.

In a quality match that featured each player making six breaks of at least 50 or above, Gilbert recovered from early 2-0 and 3-2 deficits, chalking up five frames on the trot for a 7-3 profit, which he nurtured to the end. Gilbert's top efforts were 119 and 133, whilst Lisowski's was 102.

Robert Milkins withstood a barrage of breaks (77, 134, 50, 57) early doors from Kurt Maflin to advance 10-7. 'The Milkman' won eight of the last eleven frames to turnaround a 4-2 negative. It will be his seventh bow at the theatre.

In 2015, Anthony McGill wrote the World Championship headlines when eliminating Stephen Maguire and then defending champion Mark Selby on debut. He will have another opportunity to cause chaos in the 2016 edition after dismissing 147 nearly man Thepchaiya Un-Nooh 10-7.

Yesterday's first session was very high class, but will be remembered for Un-Nooh's missed last black whilst on the maximum; agonisingly the second time it has happened to him this season after the UK Championship in December.

Other than that 140 during Tuesday, Un-Nooh, currently the highest ranked player in the world never to have played at the Crucible, rattled in a 144 - the highest break of qualifying so far. However, with the aid of a 109 himself, McGill led 6-3 overnight.

On the return, Un-Nooh crafted a quickfire hat-trick of half centuries to draw level at 6-6, but it was the Scot who pulled away once more, depositing four of the next five.

McGill has had a very average season up until now with no Last 16 outings in any of the ranking events, but he will be a feared player given his pedigree come the draw tomorrow.

Sam Baird held his nerve in a deciding frame finish to deny Liam Highfield his debut.

​The World Number 59, who was in superb scoring form throughout, registered runs of 87, 100 and 61 to take a 5-1 lead, although Highfield hit back to keep in touch with the last three of yesterday's session.

The resumption saw both players hit fine standards. Sam always held the upper hand, however, Liam eventually squared it up at 9-9 with breaks of 139 and 104 in the process.

But 'The Blade' rubber stamped his second Crucible Theatre ticket with a cool 75 in the last.

​At number 74 in the world, Mitchell Mann is the lowest ranked qualifier to emerge victorious, after he too survived a decider against the excitable Thai Dechawat Poomjaeng 10-9. He is the first debutant to get through, and makes up for the disappointment of failing at this particular round last year to McManus.

Mann controlled himself well in the first session taking a 5-4 advantage, but it was today when he really showed powerful scoring prowess with 63, 127, 55 and 89.

Like Highfield, Poomjaeng recovered from 7-9 to 9-9, but a beautifully designed 79 in the nineteenth assured the 24 year old a place in the main draw, and a guaranteed £13,250 - his largest payday to date.

Having won his first match here 10-7, and his second 10-9, Mann has been involved in more frames than anyone else; and has clearly shown a great mental approach.

The last hopeful to escape Ponds Forge this afternoon with their dreams intact was Robbie Williams, who was part of the most dramatic climax of them all.

In continuing the theme set by Highfield and Poomjaeng earlier, opponent Anthony Hamilton hauled himself back into contention and forced the tie to the wire after being two down with three to play. Ultimately, though, it would be the same resulting outcome.

At 9-9 both players had chances, but it would boil down to, somewhat predictably due to the tension, the final colours. After missing in a previous attempt, Williams potted a superb long brown under the pressure, which he followed up with the blue, and then match ball pink.

Apart from losing the opening frame yesterday, Williams never trailed. His highest break was a 105 in Frame 5. Despite failing in a match that would have seen him make it to the Crucible for the first time since 2008, Hamilton was the stronger scorer having made a 116 and 105 alongside five other half centuries.

For Williams, it is the third consecutive time he will feature in the main stages. He also has the distinct record, along with McManus, to have never lost a qualifying fixture at Ponds Forge over those last three years.

Written and published by Michael Day on the 13th April 2016 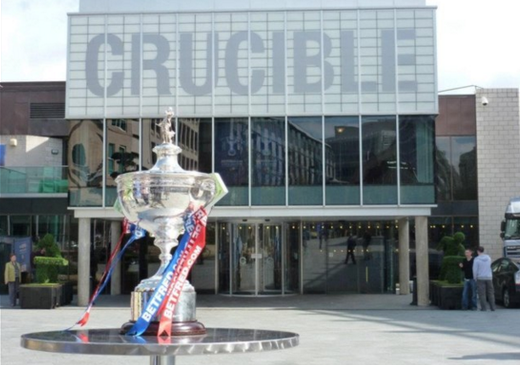