​Somewhat ironically, after being involved in some heavy mileage snooker this week, 2002 World Champion Peter Ebdon was the first player to emerge victorious from the Evening Session.

Ebdon comprehensively dispatched Ian Burns 10-2; a player he lost to 5-0 only a fortnight ago in Beijing at the China Open. 'The Force' went into a 6-0 lead yesterday, and never really looked back.

It is an incredible turnaround for Peter, who was 9-3 down to Gerard Greene in the penultimate round before sensationally coming back to win 10-9 in a match that finished just before 2am on Tuesday morning. In total, it means he has won 17 of his last 19 frames. It will be his first appearance on the main stage in Sheffield since 2013.

Another master of brinkmanship at the Ponds Forge Arena was Ryan Day, who in the end eliminated Ken Doherty comfortably enough 10-6.

​In his previous outing during the Last 80, Day had to win the last five frames when recovering from a 9-5 deficit against an in form Alfie Burden to keep his hopes alive.

He also trailed Doherty, who opened the match with a 106, and took a 5-4 overnight lead. However, three time Quarter-Finalist Day began the resumption very strongly, rapidly chalking up all four frames of the first mini-session to turn the tables. The 1997 Champion stopped the rot in the fourteenth, but Day completed the job with the following two.

​The Welshman has had a very consistent campaign on the circuit that has moved him back up to number 20 in the World Rankings. It will be his 11th Crucible bow.

Besides possibly Mitchell Mann, no one has had it tougher over the last eight days than the ever steely Graeme Dott.

The Scot began his bid with a 10-8 success against amateur wildcard Brandon Sargeant before repeating that scoreline over Noppon Saengkham.

He also had a tough time in his Last 48 fixture with Mike Dunn. There was never more than two frames between the pair until the end in a 10-7 result.

Dott maintains his exceptional record this season having qualified for every major ranking event venue he could.

Matthew Stevens went 2-0 up on Kyren Wilson, but the Shanghai Masters winner rattled in six half centuries during a realtively comfortable 10-6 win.

Through no fault of his own, the underranked Ali Carter got past a stubborn Dominic Dale to make sure he'll feature at the Crucible for the 14th time on the bounce.

It looked as if 'The Captain' would fly to the finish line when holding an almost unassailable 8-1 profit from yesterday's session, where he superbly fashioned six 50 plus breaks, including a 101 in the eighth.

Dale not only made the scoreline more respectable, but he genuinely threatened an almighty comeback when rallying with the first five frames today. But at 8-6, Carter regrouped, and managed to progress 10-6. Certainly another player the current top boys will want to avoid in tomorrow's draw.

Zhang Anda came through the all Chinese derby with a 10-7 win against 18 year old Zhou Yuelong, despite the youngster claiming the first frame with a 140. It is the third time that Zhang has made the main draw and the guaranteed £13,250 will be his weightiest ever pay packet. He opened up the evening's proceedings with a 113.

Another Chinese representative to advance was the World Number 18 Liang Wenbo, who also beat a fellow countryman in Xiao Guodong 10-6.

The 2015 UK finalist did however deposit the last frame of Tuesday's session, and then six of the next seven today to make the Crucible for the first time since 2012.

Finishing well after all the other fixtures had, 'The Hitman' saw his opposite number win four on the spin to square it up at 8-8; the first time they were level since the start. This run also witnessed King construct a 130 break in Frame 15.

Visibly angered by allowing his advantage to slip, Holt's temperament once again came under scrutiny. However, much to his credit, the 37 year old 'halted' King's momentum by taking the seventeenth before notching up a 56 in the next for a 10-8 success.

Despite never having been in the top 16, Holt is very efficient in qualifying for the World Championship. He has done so 8 out of the last 12 years.

Despite the flat draw 'all in' qualifying format being slightly controversial amongst some of the fraternity, 12 of the 16 qualifiers are currently in the World's Top 32. The outsiders being Robbie Williams (57th), Sam Baird (59th), Zhang Anda (71st) and Mitchell Mann (74th).

We can't wait for the draw tomorrow...

Written and published by Michael Day on the 13th April 2016​​ 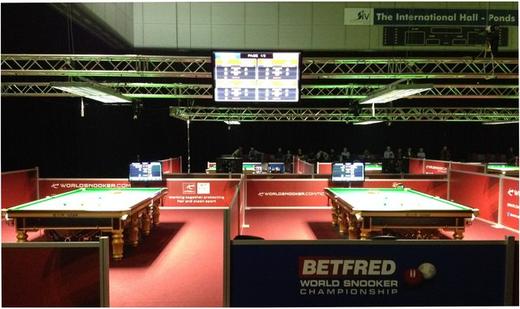