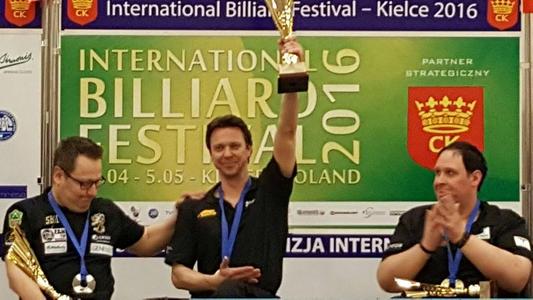 Congratulations to Sweden's Henrik Larsson who retained his WPA Wheelchair World 9 Ball Pool Championship in Poland last week. It was a record breaking fifth time he had claimed the honour.

Participants representing 10 different countries took part in the event, although it would be the pre-tournament favourites advancing to the latter stages. The opening rounds were double elimination qualifying until the single knockout Quarter-Finals, onwards.

​Larsson went through the entire process unbeaten; his stiffest test appearing to be his 7-5 semi-final victory over the host nation's Leszek Blumczyński.

​2000 winner, Fred Dinsmore from the Republic of Ireland, scooped Bronze alongside Blumczyński.

Written and published by Michael Day on the 12th May 2016​