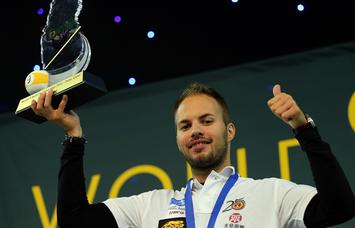 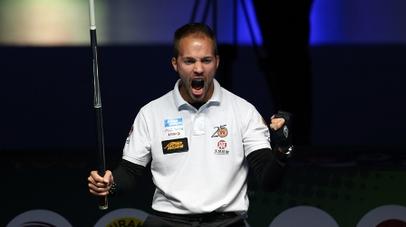 ​Austria’s Albin Ouschan knew coming into today’s semi-finals and finals at the World 9-ball Championship that just about everything in his personal and professional pool playing life was going just about perfect.  But even he couldn’t have imagined the dream day he just conjured up on the way to winning pool’s most prestigious prize.

After first blowing out Canada’s Alex Pagulayan in the semi-final, Ouschan came back to put an emphatic and somewhat shocking 13 – 6 drubbing on American Shane Van Boening to capture his first WPA World 9-ball championship in front of over 400 people at the Al Arabi Sports Club in Doha.

The victory was all the more sweet for the 25 year old Austrian because just two years ago, he placed second to the Netherland’s Niels Feijen in this very same arena.  Ouschan took that loss hard, but true to his disciplined and hard working nature, he sucked up the pain of defeat and came back better for it. Over the last two years took his game to new heights, including winning the brutally tough China Open in 2015, a successful stint on the winning European Mosconi Cup team, and wins and high finishes in many European events. And he had a baby with his girlfriend and found a peace of mind that he had never known.

This week in Doha this combination of the professional and personal  all came together to form an impenetrable force that would let nothing get in the way of success. Over the last six days Ouschan played exceptional and steady pool, and brushed off the inevitable mistakes. He executed every facet of the game to perfection.  He stayed calm under pressure. And once he took a lead, he never, ever relinquished it, right up to the very last 9-ball that won him the world title.

For Van Boening, the rout in his second straight World 9-ball Championship final has to be one of the most bitter defeats of his illustrious career.  Last year the American played brilliant pool throughout the event, only to stumble in the last half of the final and watch Taiwan’s Ko Pin Yi win the title.

[Shane Van Boening] This year Van Boening seemed to have taken his game to another level, outlasting every opponent with his glorious stroke and steely demeanor. It seemed he was destined to take it one step further this week. But instead, he fell completely flat in the final and put in a forgettable performance that never came close to the standard he has set for himself, and fans have come to expect from one of the game’s greats.

Nobody could have foreseen this happening to Van Boening as earlier in the day he put in another masterful performance, this against Taiwan’s Cheng Yushuan in the semi-final.  That match followed a similar pattern to almost all of Van Boening’s matches during the week. The American and his opponent trade blows the first half of the match. Then in crunch time Van Boening turns the screws and puts the match away.

Cheng, the current US Open champion, certainly represented a step up for the American and played great in taking Van Boening to the limit. But as usual SVB had that little extra and held off the Taiwanese in a tension filled match to win, 11-9.

Meanwhile on the TV table, Ouschan smothered Alex Pagulayan winning easily 11 -3. With the final set after a two hour break, everyone was sure they were about to witness an historic tilt. The runner-ups in this very event from the last two years were about to square off for 9-ball supremacy.

The final, however, proved to be nothing close to what was advertised. And looking back, it was what happened in the two hour gap between the semis and final that may have spelled the difference. Ouschan went back to the hotel to take a breather, grab some food and clear his head. Van Boening, on the other hand, barely took two minutes off, and headed straight to the practice table where he stayed until moments before the opening introductions of the final.

It took about 20 minutes into the race to 13 final to see that Van Boening didn’t bring the same sharpness into this match that he had brought into every match up to this point. He lacked energy while Ouschan was his usual steady and solid self. After splitting the long opening two racks, Van Boening committed several glaring tactical errors and soon found himself down 3-1. Ouschan then cleared off of a great jump shot to go up 4-1. Then Van Boening left the Austrian with an opening and it was soon 5-1.

The fact that the first six racks took over an hour certainly didn’t help the American as he literally hadn’t been off the pool table now for around five hours. Van Boening then flubbed a safety on the 1-ball and Ouschan cleaned the table again to move up 6-1. In the next rack the American missed an easy 4-ball and the steady and solid Ouschan cleared. The score was now 7-1 and everyone was wondering just where the great Shane Van Boening had gone.

Van Boening managed to stem the bleeding over the next few racks and moved the score to 8-4. But this was just the territory where Ouschan excels, with a lead and the winning line in sight. The pair traded break and runs and the score line was soon 10-5. After a poor attempt at a carom, Ouschan pushed it to 11-5. Shane would get one more but the Austrian never flinched as he reached the hill. Then with an emphatic break and run, Albin Ouschan was the new World 9-ball Champion.

[Albin Ouschan] As he drank in the accolades, took selfies with fans, and cradled his shiny new hardware, Ouschan reflected back not just on the match but on the sometimes difficult journey that had brought him to the mountain top. Years ago as an up and coming young player, he had lived in the shadow of his world champion older sister Jasmine, with whom he has always been close. Now he had completed the journey to being his own person and a world champion.

“It was unexpected that Shane would have so many problems today,” Ouschan said. “I don’t know if it was the pressure, or he didn’t feel fine but I took the early big lead and I just had it until the end.

“I always wanted to show people who I am. When I was younger I didn’t even have a name.  People always said ‘you’re Jasimin’s brother.’  I think I left her shadow two years ago when I was runner up here.

“Two years ago when I lost to Niels, I was pretty depressed. I was crying at home. I had to swallow it, to get back into my game and to focus again. Then I won the China Open and I knew I was back and that I could win it(the world championship). And now I’m here and I’m so happy and proud of myself."

A visibly tired and dejected Van Boening admitted he didn’t have the proper energy in the final. The American, however, put on a brave face and vowed to return.

“I think I ran out of gas,” Van Boening said. “I wasn’t really tired, I just made a couple of mistakes at the beginning and I just had a bad start. I just tried to fight my way back but I just didn’t seem to have it today. And then he got a big lead and then he started to break and run every rack and at that point there was not much I could do. Hopefully I can get a chance to make it to another final here and win this thing. But today just wasn’t my day.”

Indeed it was the day of Albin Ouschan, who made sure to take a moment to give a nod to the personal side of his life, an ingredient just as important to him as the endless hours spent practicing his pool skills.

“Before every match I look at my baby’s photos, and my girlfriend she writes me some nice things, telling me that they are always behind me. Over the last few years I’ve practiced a lot learning how to calm down in the heavy pressure situations like in the last rack.

“I always dreamed about this moment and now it’s here and I can’t really realize it. It probably takes a couple of days. It’s an awesome moment for me.”

The 2016 World 9-ball Championship was hosted by The Qatar Billiard and Snooker Federation(QBSF), and was sanctioned by the The World Pool Billiard Association, the governing body of the sport of pool.