​Written and supplied to us by Ted Lerner, WPA Press Offier / ​Photos Courtesy of Bo Bader

Omar Al Shaheen knows that success in championship pool is as much about perseverance as it is about being an amazing shot maker.  Sometimes, when things aren’t going your way, you just have to be patient.  When your time finally does come, you have to be ready to grab the cherry.

Today at the Al Arabi Sports Club in Doha, that cherry came in the form of a brilliantly played match against former World 9-ball Champion Darren Appleton. Today was Judgement Day at the 2016 World 9-ball Championship, the last chance to make it into the Final 64, the knockout rounds and the real road to 9-ball glory.

Of course Appleton, one of pool’s giants, was the heavy favorite. But the 23 year old Kuwaiti played flawlessly and completely carefee, while the Brit couldn’t find the measure of the break shot and looked tight. Al Shaheen won in a master class, 9-5, putting Appleton out, and himself in the money rounds of pool’s biggest event.

To understand just how Al Shaheen got to this point of being able to oust one of pool’s best players, it helps to look back over the last few days.  The talented and good looking youngster didn’t even have a spot in the tournament a few days ago. He entered the brutally tough qualifiers last week, reached the finals two times, only to lose to two top players. But as he was lamenting what could have been this year, he got the call that another player had dropped out and, as the leading point holder of the qualifiers, he got the very last spot in the world championship.

Al Shaheen then lost his very first match and was forced over to the losers’ side of his group bracket. But then the Kuwaiti found his groove, handily beating Sweden’s Marcus Chamat, to set up a showdown with Appleton. He suddenly realized all the tough competition and, yes, the losing, had prepared him for this moment.

“I think it’s good that I lost many times,” an ecstatic Al Shaheen said after disposing of Appleton. “In the qualifiers I lost three times, two of them in finals to very good players. In the group stages I lost my first match. So that’s four times. So now I can accept losing. And it was good practice. Today I just play my game and I am relaxed. Darren is a very good player and I feel very good right now.”

31 one other players left the Al Arabi with similar wide grins today as they booked their spots in the Final 64 which begins Tuesday morning here.  They  join the 32 players who qualified on Sunday in what is a brutally stellar  field of pool greats ready to do battle  over the next three days  for  pool’s most prestigious prize.

Leading the way, as usual, are the Taiwanese and the Filipinos. Taiwan brings 10 heavyweights into the knockout stages, including defending champion Ko Pin Yi, Chang Yu Lung and Chang Jun Lin. Filipino fans will have nine players to get behind  including Dennis Orcollo, Warren Kiamco, Lee Vann Corteza, Carlo Biado, Jeffrey De Luna and Johann Chua. Filipino Alex Pagulayan, who won the World 9-ball crown in 2004, plays out of Canada and also made it through to the knockout rounds.

It wouldn’t be surprising if China finally takes its first World 9-ball title. Former champion Wu Jiaqing(formerly Wu Chia Ching) is playing rock solid pool, while Lui Haitao has consistently been raising his game over the last few years. Six Chinese players will be featured in the Final 64.

Poland has proved this year that it could arguably be Europe’s leading pool country with four players qualifying. A slew of other Europeans make up the field as well.

Perhaps the most notable statistic this year is the rise of the Middle Eastern players.  Six players from the Middle East have qualified for the knockout rounds, a first in the history of this prestigious event. Clearly having the World 9-ball Championship in Qatar for the last seven years has significantly helped the sport grow.

Judgement Day always brings with it plenty of jangling nerves and high drama as players wilt under the gravity of the circumstances. One small roll of the ball can spell the difference between a player going 2 games and out, and perhaps a run at a world title.  If there was ever a sport where whole careers rest on a razor’s  edge, pool is it.

The Philippines young Jeffrey Ingacio has given Pinoy fans high hopes for the young generation to make their mark, but he had to get very lucky in holding off tough Canadian Francis Crevier to advance, 9-7.

Great Britain’s Jayson Shaw has played himself into being one of the top players in the world over the last six months, but today he had to come from way behind against a stingy Justin Campbell of Australia to qualify, 9-7.

2007  World 9-ball Champion Daryl Peach had to go toe to toe with the Philippines Antonio Gabica, but the Brit prevailed 9-7 in a high quality match.

Bangladesh isn’t the first country to come to mind when one thinks of great pool players. Today, however, will stand as a monumental day in Bangladeshi cue sports history. 29 year old MD Alim became the first player from Bangladesh to make it to the knockout rounds of the World 9-ball Championship. Alim, who owns a business installing satellite TV services in Dhaka, was playing in his very first world championship this week. Today, he went to the wire with Italy’s Bruno Muratore and showed major league poise and skills in crossing the finish line to qualify.

Another player to look out for is Iran’s Ali Maghsoud. A few days ago Maghsoud took down the great Mika Immonen. Today the Iranian sucked up the massive pressure and beat Japan’s Hiroshi Takenaka, 9-7 to make his first Final 64.

Other Middle Eastern players continued to impress. Abdul Rahman Al Amar of Saudi Arabi continues to show maturity beyond expectations. Today he came from behind to win at the wire against Poland’s Konard Juszczyszym, 9-8, and move on to the money rounds.

Last year’s runner up Shane Van Boening again had the break mastered as he trounced the Philippines Francisco Felicilda, 9-3. Oscar Dominguez made it two Americans in the final 64 with a win today.

One particular match at the end of today’s play seemed to encapsulate the drama and pressure of Judgement Day to a “T.”  The Philippines Carlo Biado was not playing well and found himself down to Japan’s Hayato Hijikata, 7-4 in a race to 9. Hijikata pushed the score to 8-6, but with the finish line and a qualification in sight, the Japanese began to wilt and the match went to 8- 8 and a pressure packed one rack decider, with Hijikata breaking.

The Japanese sank a ball on the break and then proceeded to make a superb full table bank on the two, with an open table to the win. But just as Biado started to slink down in defeat in his chair, Hijikata missed a wide open shot on the 4-ball. The Filipino bounced out of his chair but even then his legs looked weak from the pressure. Biado held it together and cleared the table for an unlikely spot in the knockout stages.

“When he made that 2-ball, I just knew the match was over,” a seriously relieved Biado said after the match. “But then he missed the 4-ball and I knew this was my chance. My heart was beating and it was pressure.  Now that I won the match, I have a lot of confidence. I’m in the Final 64. Anything can happen, and anyone can win. May the best man win.”

Up to date brackets and live scoring can found at this link:
http://www.online-brackets.com/view/user/wpc9ball/1010

RESULTS DAY 3
Winners advance to the Final 64
Losers are out.

Written by Ted Lerner, WPA Press Office. Many thanks to Ted for allowing us to share his article!​​ 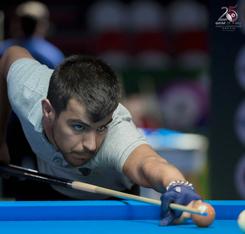 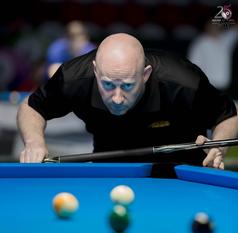 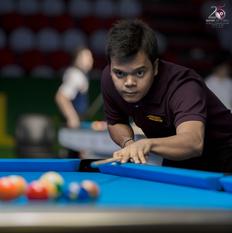