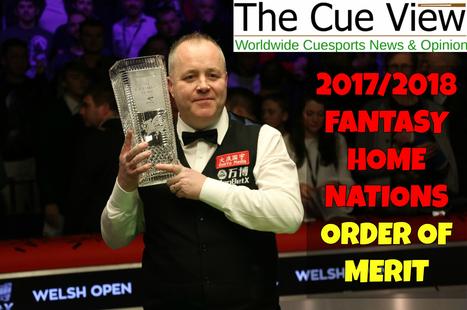 ​After the conclusion of last night's Welsh Open, we can now reveal who the most successful player from this season's Home Nations Series is with our fantasy Order of Merit. Last year's champion was Stuart Bingham.

Congratulations to John Higgins, who accumulated the most prize money from his visits to Barnsley, Belfast, Glasgow and Cardiff throughout the campaign.

Predictably, the top four positions in the rankings were taken by the four champions of each Home Nations event, although Higgins was slightly more consistent with a Semi-Final run at his home Scottish Open; Last 16 and 32 finishes at the English and Northern Ireland Open's respectively too.

I have said it before numerous times, but the Million Pound Bonus does look like a fad to me. It did generate column inches after this year's English Open when O'Sullivan briefly threatened the virtually impossible, although it was something 'The Rocket' himself said wasn't in his mind of achieving.

In terms of longevity, why not instead give a prize to the winner of this Order of Merit, or perhaps have a Home Nations Grand Finals with the Top 32 (34) qualifying below. I feel this would give an added dimension to the series and may entice all the big names to enter all the events.

You could perhaps replace this event with the upcoming Players Championship, which for me, is very difficult to distinguish from the recently completed World Grand Prix.

Anyways, here are the final standings.

Written and published by Michael Day on the 5th March 2018