ZHENG MAKES IT TWO IN A ROW

Zheng Yubo has completed a remarkable double after winning the Lianyungang leg of the 2017/18 JOY Chinese 8 Ball Tour.

This was the second of four such tournaments held throughout the year in China. The series also acts as a qualifying system into the lucrative JOY World Masters which will be held near the start of next year.

6 continents were represented in the 300 plus starting entry with international players from 13 different countries joining the large home contingent.

Despite the cosmopolitan beginning, though, the latter stages were exclusively contested by players from the host nation. The best performing overseas player was Myanmar's Ko Ar Ti, who was within one victory of reaching Stage Four.

Zheng took the title and banked the $15,000 first prize following a 19-14 success over Qin Liwen. His achievement is even more pronounced given the fact he also won the first tour event in Linyi a couple of months ago. These back to back triumphs put him well clear at the top of the rankings.

Reigning World Chinese 8 Ball Champion and a two time former winner of the Masters, Yang Fan lost in the Last 32.

The main event 2018 JOY World Chinese 8 Ball Masters boasts an impressive $150,000 purse to the winner. Englishman Gareth Potts made it a hat-trick of Masters titles earlier in the year after a dramatic comeback against youngster Zhang Kunpeng which resulted in a Black Ball Shootout.

The next stop on this year's tour will be in Xi Ning City between the 18th-27th August.

​Written and published by Michael Day on the 15th July 2017 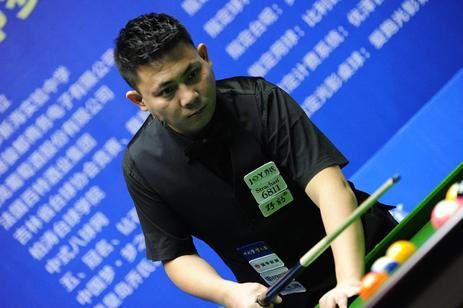