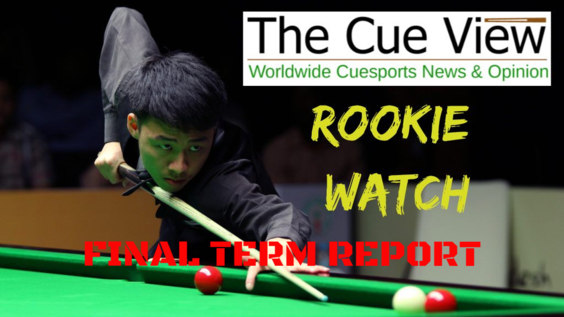 With the professional season now over, let us look back at how the 12 players who made their professional debuts got on throughout the year with our last edition of Rookie Watch...

Xu Si recently won the 'Rookie of the Year' award at the end of season World Snooker Awards - and rightly so.

​The 20-year-old Chinese cueist racked up £29,500 in prize money with his biggest payday coming at the Indian Open where he reached the Semi-Finals. Xu also reached the Last 16 of the Scottish Open (maybe helped by the withdrawal of Mark Williams in Round One) and won his opening round tie against Mark Davis at the UK Championship.

His results meant he finished 81st on the one-year list, the highest of all 12 debutants.

In second on that list with £28,000 was fellow countryman Yuan Sijun. The teenager was known as a very dangerous amateur wildcard in home events, and he has made a solid start to life as a top tier player.

Despite any particular deep runs in events, Yuan has picked up wins throughout. His peaks being a victory over Joe Perry in the English Open and against Shaun Murphy in Shanghai Masters qualifying.

Li Yuan is the third best performing rookie with £22,500 - £10,000 of which came from his run to the Last 8 at the Northern Ireland Open. Li was winless at the start and end of the season, but had a consistent spell in the middle where money was accumulated.

​Another Chinaman, Chen Zifan (£17,500), is next up. A Q-School graduate from last year, Chen also defeated Murphy, as well as Barry Hawkins during the campaign.

Ashley Hugill (England) and Niu Zhuang (China) banked £16,000 each. Hugill's highlight was getting to the Last 16 of the Scottish Open (eliminating Ali Carter along the way), whilst Niu qualified to play at the Tempodrom in Berlin.

​He had to wait until October, but Chris Totten's first professional win was a memorable one when he defeated Neil Robertson to qualify for the Shanghai Masters. The Scot's best placed finish was a Last 32 berth in the Scottish Open, where he lost to Robertson (the eventual winner).

​Iranian Soheil Vahedi has shown glimpses of class throughout the year, but he has been frustrated by narrow defeats and travel issues. The former World Amateur Champion totted up £12,750, but there is definitely the potential for bigger things next season.

Billy Castle (England) is next up on the one-year list. Castle will mostly be remembered for a run to the Last 16 of the European Masters in Lommel, Belgium where he lost in a deciding frame to Cao Yupeng.

Lukas Kleckers, Germany's only current representative on the main tour, announced himself with an impressive victory over defending champion Neil Robertson at the Riga Masters in front of the live Eurosport cameras, where he produced an 83 break in the deciding frame.

Since then, though, results have gone south dramatically. In fact, Kleckers hasn't registered a win since.

Egyptian Basem Eltahhan has probably caught a few out, with people realising he is better than they thought.

The 2017 African Champion has only secured prize money this term from the Shoot-Out, although he did miss out on several events he was eligible to enter. His most noticeable point of the season was giving then reigning champion Mark Selby a severe workout during their opening round meeting at the UK Championship. Eltahhan only lost 6-4 in the main arena at the Barbican in York, chalking up breaks of 61, 79 and 99 in defeat.

Matthew Bolton has found life on tour tough, especially given that he still lives in Australia and has traveled over in spells for events. The 2017 Oceania Champion may be winless this season, but maybe there were some signs of improvement in the latter stages and he still has next season to put things right.

Prize money continues to increase on tour, so the bar for how much money you need to win to stay on the professional circuit seems to be rising.

​However, this season's 64th placed player on the World Rankings was Alan McManus who had £86,900. Even if top player Xu repeated his performances this season, he would finish well short of the Top 64 cut-off.

Barring some very strong results during the new 2018/2019 campaign which starts in July, it already looks as if the most likely route to keep a pro tour card will be via the One-Year list, where eight players will re-qualify for the circuit with guaranteed two-year cards.

Putting a few things into context, whilst it may seem a lot longer, Yan Bingtao has only just completed his second season as a professional. 18-year-old Yan is already up to 23rd in the World Rankings with £215,125 to his name. You can see why Yan is so highly thought of, and touted as a future major champion.