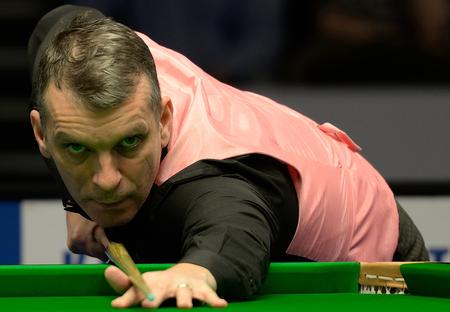 44 year old Mark Davis completed his first 147 maximum break in a professional match during the deciding frame of his Group 3 final win over Neil Robertson. The reigning World Seniors Champion now becomes the oldest player to have achieved the feat.

It was the third consecutive group that Davis had qualified for the Play-Offs; but on both previous occasions he was denied a final berth. This time he ousted Ryan Day (the Group 1 & 2 Runner-Up) 3-2 to make it 'third time lucky'.

Australia's Robertson earlier topped the Round Robin, therefore repeating his success from Group 2. After beating Barry Hawkins 3-1 in the Semis, he led Davis 2-1 in the final before the turnaround.

The Group Winner will join David Gilbert and Anthony McGill in the Winners Group at the start of March.

Ali Carter and Joe Perry were eliminated from this year's event after finishing in the bottom two. Mark Williams once again managed to stay afloat in the tournament by ending up fifth.

Group 4 begins on Wednesday. Along with the returning Robertson, Day, Hawkins and Williams, newbies Kyren Wilson, Shaun Murphy and Mark Allen also come to the party.

Written and published by Michael Day on the 11th January 2017