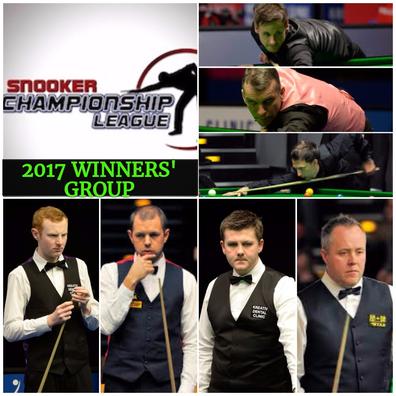 WHO WILL WIN THE WINNERS' GROUP?

From the completion of one unique snooker event (The Shootout) to another, as we prepare for the 2017 Championship League Winners' Group which will be played across Wednesday and Thursday at the Ricoh.

The seven initial 'Group Qualifiers' have now been finalised; John Higgins being the last player to advance through earlier this evening after victory over Mark Selby in the Group 7 Final.

Coverage of this tournament amongst the snooker community has been fairly low key so far, however the stakes are considerably raised for the finale - therefore so will be the profile.

Not only is there an opportunity for a professional title and a very handy payday, but also a guaranteed spot in the lucrative Champion of Champions which will be held at the same venue once again later this year.

Reigning champion Judd Trump clearly has a fondness of this best of 5 frames, Round Robin format. A winner previously in 2009 and 2014, he beat Ronnie O'Sullivan 3-2 (who didn't enter this year) in the 2016 Grand Final. JT has a chance to defend the title courtesy of emerging as the winner in Group 5.

Ryan Day has had an eventful time so far in Coventry. The Welshman started the tournament right back in the opening group. Not only avoiding relegation from each pool, Day made 2 finals and 3 semi-finals before finally securing a passage through when beating Martin Gould in the decider of Group 6.

Because he has been involved in so many groups (making the play-offs in all 6), Day has already banked £23,700 in the qualifying process - over £10,000 more than anyone else!

Of the 7 names left, only 3 have booked berths at the Champions of Champions so far. These being Anthony McGill (Shootout), Stuart Bingham (Welsh Open) and defending champion Higgins. The following two days could mean a route through to one of the most prestigious events on the professional circuit.

David Gilbert took Group 1 whilst Mark Davis made a 147 when claiming the Group 3 title against Neil Robertson in the deciding frame of their final. This chance could represent their most viable way into the CofC.

The Winners' Group can also be quite a profitable one for the overall champion. Similar to the system of the now defunct Premier League, players will be rewarded for winning frames. Every frame won in the Round Robin will bank you £200 - if you make the top 4 play-offs it becomes £300.

The overall champion gets £10,000, the runner-up £5,000 and the beaten Semi-Finalists £3,000 each. Remember, these figures are in addition to what they have already earned throughout.

Whether a fan of this or not, the next couple of days do represent importance.


Written and published by Michael Day on the 28th February 2017