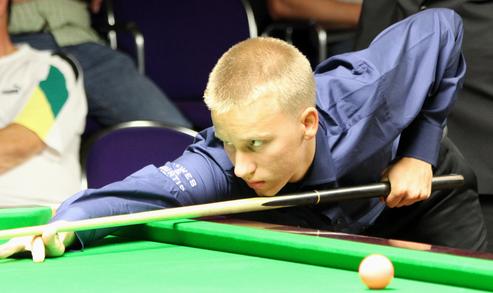 Switzerland's Alexander Ursenbacher assured himself of a return to the top tier when claiming the Under 21's title here last weekend. The 20 year old is still in the race for a unique double having also advanced top of his group with 4 wins out of 4 in this.

​The limelight has certainly been on 15 year old Jackson Page recently. Following on from his Last 32 run at the Welsh Open as a wildcard last month, he has since won the European Under 18's and reached the final of the Under 21's before losing to Ursenbacher 6-4.

Page still has an opportunity to make it a hat-trick of final appearances in Nicosia as he progressed to the Knockout section when he finished second behind Filipiak in Group E.

​Another Welshman through is Jamie Rhys Clarke after he went undefeated in Group A. Clarke has been the runner-up in this event for the past two years. Along with a number of other very near misses in major international events, he will be hoping to finally cross the line on this occasion.

Poland's Adam Stefanow has spent much of this season competing in professional events as a Q-School Top-Up player. Despite this, he is still of amateur status and therefore wants a spot on the main circuit next season as a professional. ​He has made an ideal start here by winning all four of his matches 4-0.

​This is a feat that only Ireland's Brendan O'Donoghue has achieved too.

Three time English Amateur Champion and two time World Amateur finalist David Lilley has never possessed a pro tour card, although earlier this season he made the Quarter-Finals of the Indian Open as a Q-School Top Up. The 41 year old could be on his way to European glory after navigating Group K with little trouble.

20 year old Brian Cini may be the next prospect from the Cuesports mad island of Malta; he too is in the Last 64 draw courtesy of an unblemished qualifying record as well.

All of the UK entrants made it through the group stage.

For more information, and all the results, please visit the EBSA tournament page on their website here.

Written and published by Michael Day on the 16th March 2017