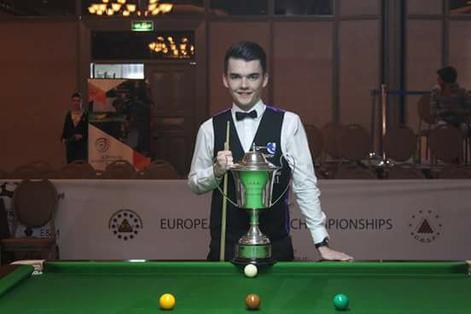 18 year old Chris Totten of Scotland is the 2017 EBSA European Snooker Champion following a 7-3 final victory over Andres Petrov earlier today in Nicosia. It is a result that will see him be offered a guaranteed two year tour card for the professional circuit.

​116 players from 35 different nations entered what was the 26th edition of this event. The pre-tournament favourites which included previous champions and former main tour players eased through to the Knockouts, but it was perhaps the surprise pairing of Totten and Petrov who were left after nearly a weeks worth of action.

​Interestingly, both finalists had already met when they were drawn in the same Round Robin group together. On that occasion, Petrov took a 4-3 win, a result that helped him top the group with 4 wins out of 4. Totten qualified in second with that match being his only defeat. He would later serve up revenge.

Totten had an extremely tough route through to the final. Following a 4-1 win over Joris Maas (Netherlands) 4-1 in the Last 64 he then eliminated 1995 winner David Lilley (England) 4-0, Brian Cini (Malta) 5-4, former professional Kacper Filipiak (Poland) 5-3 and Jamie Rhys Clarke (Wales) 6-4.​ Against Cini he recovered from 4-2 down.

Petrov became the first ever player from Estonia to reach a major international snooker final. His victories in the KO's were Jan Jelenic (Croatia) 4-1, Jordan Brown (Northern Ireland) 4-1,

With a combined age of just 38 years between them (Petrov being only 20 himself), this was surely one of the youngest match-ups for the final in history.

Predicted to be close, the scores were tied at 3-3 come the end of the first session. However, with a grandstand finish looking likely, Totten chalked up four frames in a row for the biggest achievement of his young career so far.

​The champion follows in the footsteps of countrymen Graham Horne (1996) and Scott Donaldson (2012) who have also lifted this trophy. It is the sixth year in seven that someone from the UK has won it.

Despite defeat, Petrov can be very proud of his accomplishments this week. Along with Under 18's finalist Amir Nardiea of Israel last week, new snooker nations are now featuring in the latter stages of events like these. It was also the first time Cyprus had hosted a festival of snooker on this sort of level; and by all accounts, they did it very well.

Much talk recently has been about the success of older players on the professional scene. However, 6 of the 8 Quarter-Finalists here were under the age of 23.

I assume Totten will accept his pro tour card, but as we know, funding for new professionals on the circuit can be an issue. Previous champions such as Mark Allen, Robin Hull and Luca Brecel will perhaps be an inspiration for him moving forwards into his chosen career path.

Picture above is courtesy of the Scottish Snooker Facebook page.

Written and published by Michael Day on the 19th March 2017​