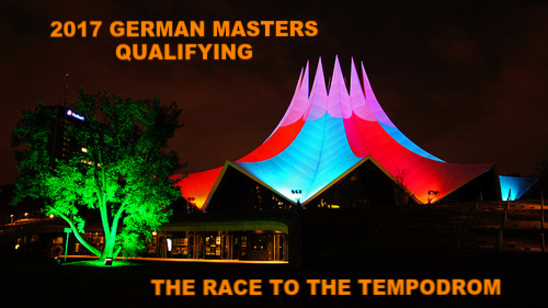 FROM THE METRODOME TO THE TEMPODROM

After the conclusion of a pulsating UK Championship in York on Sunday evening, the Cuesports roadshow heads off in different directions. Down South in London we have the 23rd annual Mosconi Cup at the Alexandra Palace (read my preview for that here), whilst staying in the North, the snooker circuit embarks on qualifying for the Tempodrom...via the Metrodome in Barnsley.

​127 matches were played at the Barbican Centre in the last fortnight; the 2017 German Masters will have just as many. However, with only 32 players permitted to feature at the venue stages come the 1st-5th February, two rounds of qualifying are needed at the Yorkshire venue this week.

The draw for this event was only released on Monday Lunchtime (today as I write this). This was obviously not ideal for the players involved, but the positioning of seeds was dependent on the outcome of the UK Championship.

Unlike most other overseas events, there are no wildcards or matches held over to the venue to assure certain star names will be there. Last time during qualification, a host of high ranked players missed out on the trip to Germany - 7 of the then World's Top 16, including Ronnie O'Sullivan, John Higgins, Neil Robertson and Ding Junhui.

Even now reigning champion Martin Gould is not exempt. He begins his first ever major ranking title defence against Sanderson Lam on Tuesday evening. Should he navigate that challenge, he will then play the winner of Jason Weston or Craig Steadman to reach Berlin.

As has been the case in most years, nearly all of the World's top names have elected to enter. I think the stunningly unique venue and enthusiastic fan base are genuine appeals to the players.

Mark Selby is undoubtedly the best player in the World right now. World Number 1 by about a trillion miles, he added the UK Championship to the World and International Championships he already currently possesses. Now a MULTI triple crown winner, and along with the Paul Hunter Classic he also claimed a few months back, his second stint as the reigning World Champ is already far more successful than his first.

Back in 2015, the German Masters was the first title he would win as WC. With the rolling two year ranking system in place, Selby does have prize money to defend here. He is so far in front of everyone else, though, that it is not really a concern, but he is very close to breaking the £1million pound barrier which would be yet another special achievement.

He does however have a potentially awkward opening fixture with Dechawat Poomjaeng. Either Michael Wild or Fang Xiongman would be next up after that.

Despite losing his perfect record in UK Finals to Selby (just like in World Finals too), there were overall positives for Ronnie O'Sullivan in York. German Masters champion in 2012, 'The Rocket' faces the Isle of Man's Darryl Hill on Wednesday night.

Should he overcome Hill (no pun intended), he is likely to face a tougher assignment in the form of either Gary Wilson or Rod Lawler - both former major ranking finalists in the Last 64. O'Sullivan will have to be weary; 2 of the last 3 years he has failed to come through qualifying.

2014 winner Ding Junhui has surprisingly given it a miss, although I don't think he is in the Scottish Open next week either, therefore he is probably enjoying a prolonged break before the Masters in the new year.

World Number 2 Stuart Bingham has a particularly tricky section. He plays the in form Alfie Burden first up, and if he gets through, then clashes cues with either Peter Lines or Yu De Lu - two players who made headlines at the UK, Yu beat Bingham in the Last 64 there.

​John Higgins has a very average record in this event since its relaunch in 2011 - he has failed to reach the Quarter-Finals in any of the five editions he has played in. Currently in great form, he is set to play Rory McLeod, but could then square up to young Chinese sensation Zhao Xintong (if he defeats countryman Li Hang).

Talking of teenage talent from China, there will be a clash of generations when Zhou Yuelong (18 y/o) plays Jimmy White (54 y/o) for the second time this season.