2017 GERMAN MASTERS - WHO ARE THE QUALIFIERS?

For the second successive year, Top 16 stars didn't have it their own way during German Masters qualifying in Barnsley this past week.

​The venue stages for the 2016 edition missed out on seven of the then 'World's Elite'. This time, if you include Liang Wenbo's withdrawal and Ding Junhui's non-entry, 7 again will not be appearing at the Tempodrom in Berlin between 1st-5th February. And that figure could well have been more!

Players currently ranked 3-6 will all not be in Germany (Ding is 5th for reference).

Despite being bang in form, John Higgins' terrible recent record in this event continued when he was swept aside 5-1 in the Last 64 by exciting Chinese rookie Zhao Xintong, who makes the final stages for the second year in a row after getting there last time as an amateur. Higgins has now failed to qualify in 3 of the last 5 years.

Shaun Murphy was also victim to a fresh faced teenager from the Far East when he was eliminated 5-4 by former World Amateur Champion Yan Bingtao (pictured). Yan is having a remarkable debut season; this is already the 8th time he has made the Last 32 of an event. Still just 16 years old, who knows what records he could break?

Since having a blistering October, Judd Trump's form has dipped. He too lost 5-1 at the same stage to Tom Ford.

Also falling one hurdle short was World Number 8 Joe Perry, who squandered a 3-0 lead against the evergreen Jimmy White.

At 54 years old, it is incredible how White still has the ability to compete at the top level. After beating a player three times younger than him in Round 1 (Zhou Yuelong 5-3), he made breaks of 94 and 61 to topple Perry 5-3.

The most dramatic turnaround was the collapse of Kyren Wilson, who blew a 4-0 lead against John Astley.

The 2015 Shanghai Masters winner made breaks of 114, 96 and 53 before the mid-session interval, with his opponent scoring just a total of 8 points. However, despite not making a break of 50 or above himself, Astley conjured up an astonishing recovery by winning a batch of close frames to stun the World Number 16 in a decider. The victorious Astley was overall outscored 577-390!

Reigning champion Martin Gould is defending a major ranking title for the first time. He had no such worries making it through in defeating Sanderson Lam 5-1 and then Craig Steadman 5-1.

Comfortably the 'Player of 2016' Mark Selby continues to efficiently bulldoze his way past opposition. The newly crowned UK Champion can now enjoy the festive period off (he hasn't entered next week's Scottish Open) after beating both Dechawat Poomjaeng and Fang Xiongman 5-0.

Ronnie O'Sullivan bounced back from his York disappointment, although he nearly came a cropper against the Isle of Man's Darryl Hill in the First Round. O'Sullivan squeezed past 5-4, and was then made to sweat a bit beating Gary Wilson 5-3. In Berlin he will clash with Northern Ireland Open winner Mark King, who recorded his first wins as a major champion.

Stuart Bingham gained revenge on Yu Delu (he'd lost to him at the same L64 stage in York), but only 5-3. Mark Allen and Mark Williams both survived ninth frame finales in booking their berths.

Other members of the Top 16 Neil Robertson, Barry Hawkins and Marco Fu made it through in slightly less stressful circumstances.

​It was an eventful four days in Yorkshire with Thursday producing ten of the most memorable minutes of snooker you could imagine.

Ali Carter fired in a 147 maximum break during his fixture against Wang Yuchen, only to have his bonus prize halved by Ross Muir who achieved the same feat literally minutes later in the same arena when facing Itaro Santos. It could have been even more unbelievable, as in between these two achievements, Judd Trump missed the last red on 112 when polishing off Paul Davison! It was only the second time in history that two perfect games had been made in the same day.

As the draw would have it, 2013 champion Carter ousted Muir 5-4 the next day.

There were a number of victories from overseas members of the tour in Barnsley. As well as the before mentioned qualifiers, Robin Hull of Finland (beat last year's Runner-Up Luca Brecel on the way) and Akani Songsermsawad of Thailand (made 3 tons in beating Jack Lisowski) progressed. 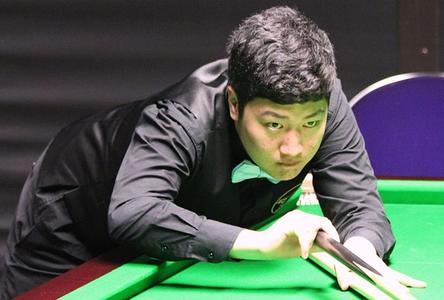