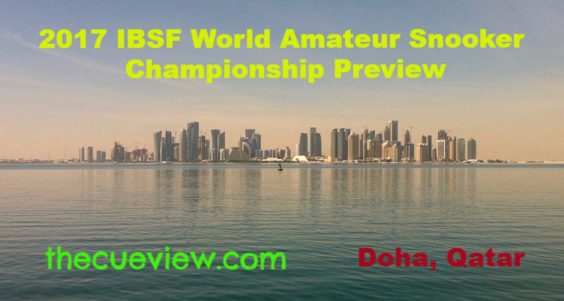 The 2017 IBSF World Amateur Snooker Championship begins this Saturday in Qatar. We take a look at what this year's event has to offer, and who the most likely contenders are...

​First played for in 1963, this championship is steeped in history with some of the sport's most famous players getting their name on the trophy before they turned professional. Crucible champions Ken Doherty and Stuart Bingham have won it, as well as Jimmy White, Doug Mountjoy, Stephen Maguire, Marco Fu, Mark Allen and James Wattana to name a few.

The last decade has seen a real shift in dominance by Asia. Of the last 10 editions, players from the eastern continent have won 9 of them, with just Alfie Burden's victory in 2009 disrupting the pattern. Thailand (3), Iran (2), China (2), Pakistan and India have all had representatives claiming the title during that time.

This year's Championship was originally scheduled to be held in Malta, however they withdrew their bid during the summer. Qatar gratefully stepped in to host the event in the same venue they did last year.

According to the Entry List on the IBSF website there will be 98 players from 41 countries competing in the Men's Championship; again with all 6 continents represented.

However, numbers are down by 21 from the 2016 staging when 52 nations took part. The timing of changing host countries may have been a factor, but the main talking point is that this year's winner will not be awarded a professional tour card due to the very public divorce between the International Billiards and Snooker Federation and the World Professional Billiards and Snooker Association.

​Without offering an avenue onto the top tier of the sport, many of those with professional ambitions may have skipped playing in this event to use their resources on tournaments that do. For possibly the first time ever, there will be no English or Scottish representation in this event.

Despite the rift and drop in numbers though, this championship is still very prestigious and looks set to once again be highly competitive.

​China have sent over talented teenagers Fan Zhengyi and Luo Honghao - the pair contested the IBSF World Under 21 Championship in their homeland earlier in the year. Just 16 and 17 respectively, both have made 147s in practice, Luo has also constructed one in competition.

A quartet of Welsh players have made the trip to Doha, this includes last year's Runner-Up Andrew Pagett. The former Crucible qualifier lost to Soheil Vahedi 8-1 in the final.

Brazilians Igor Figueiredo and Itaro Santos could well use their experiences from the professional tour to good use here and mount serious challenges. Figueiredo was defeated by Burden in the 2009 Final.

India's multi-disciplined Pankaj Advani will be chasing this title for what would be a record third time following successes in 2003 and 2015. Advani has been in Qatar this last week playing in the English Billiards events, from which he defended the Short Format World Championship.

Jeff Jacobs (Belgium), Amir Sarkhosh (Iran), Brendan O'Donoghue (Republic of Ireland) and Keen Hoo Moh (Malaysia) are other familiar names who could do well, whilst former Q-School graduate Ahmed Saif is likely to be the host nation's best hope.

As usual in IBSF competition, the format is initially Round Robins then followed by the Knock-Out stages.

To keep up to date with the latest news and scores, please visit the IBSF website here.