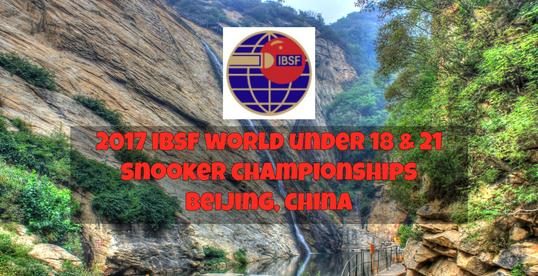 19 different countries are set to be represented during the 2017 IBSF World Under 18 Snooker Championship which starts on Saturday in Beijing.

This age category is a recent addition to the portfolio of IBSF events with just two previous editions staged -  Hong Kong's Ka Wai Cheung (2015) was the inaugural champion in Russia, whilst Wales's Jackson Page took the title in Belgium last year.

To my knowledge, the winner doesn't receive a professional tour card, but they certainly do have doors opened for them such as an almost certain wildcard to the World Championship Crucible Qualifiers at Ponds Forge. This was the case for Cheung and Page.

Putting aside all the perks, the opportunity to be called a World Champion may not come around all that often, regardless of which category. This Under 18's tournament looks extremely competitive with host nation China entering 10 players.

The youngest Chinese representative is 13 year old Jianbo Zhao, who according to his profile on the IBSF website has already made a 147 break in practice. Fellow countryman (or boy?) 17 year old Yang Song has also compiled a maximum before. With the venue being the Chinese Billiards and Snooker Association World Snooker Academy, the conditions should be excellent for everyone involved.

Reigning champion Page is back to defend. Still just 15, he could have his name on the honours list more than once by the time he is no longer eligible. Welsh team mates Dylan Emery and Tyler Rees are also genuine contenders.

It has been a while since an English cueist has won an IBSF competition of any description. The strong trio of Mark Lloyd, Riley Parsons and Jed Mann will harbour hopes of stopping that streak.

Another player present will be Israel's Amir Nardeia, who was a somewhat surprise finalist at the European Under 18's earlier this year in Cyprus - another title that went to Page.

Thailand has a proud history in major amateur events; their three representatives appear capable to follow suit. Likewise, the growing global profile of Iran may have interest come the business stages.

As per normal for IBSF competition, this starting entry of 48 will be split in Round Robin groups with qualifiers making the Knock-Out stage.

The long running and well established World Under 21 Championship follows the conclusion of this. The winner of that will join a list full of mega star previous champions, most notably Ronnie O'Sullivan. A guaranteed two year pro tour card will also be offered there.

To keep up to date with both championships, please visit the International Billiards and Snooker Federation website here.

Written and published by Michael Day on the 7th July 2017