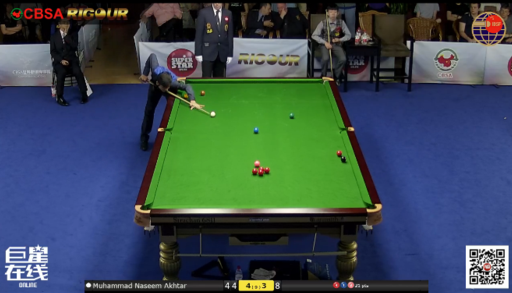 ​AWESOME AKHTAR IS A WORLD CHAMPION

In an entertaining final, the 16 year old beat home player Peifan Lei 5-3 to lift the trophy. Whilst he isn't expected to be offered a pro tour card, many doors will open for the youngster, including the likelihood that he will be invited to Ponds Forge World Championship Qualifying next year -  a bonus that has been given to previous winners.

Akhtar was clinical throughout the entire competition, going unbeaten. Having qualified top of his group with 3 wins out of 3, in the Knock-Outs he beat Fuyi Deng (China) 3-0, Haris Tahir (Pakistan) 4-1, Florian Nuble (Austria) 4-1 and then Amir Nardeia (Israel) 4-0.

Lei too reached the final undefeated – impressively dropping just 4 out of 23 frames on route. He also led the final 3-1 before Akhtar chalked up four frames in a row.

The result means Asian participants – mainly from China, continue to dominate the international amateur scene. Looking at the winners of the IBSF's major championships over the last decade, this certainly seems to be the case.

In this tournament 12 of the Last 16 were from Asia, whilst Nardeia was the only non-Asian come the Semi-Finals.

Nardeia actually knocked out defending champion Jackson Page (Wales) in the round before - perhaps gaining some revenge for his defeat to Page in the European Under 18's Final earlier this year in Cyprus.

Hong Kong's Ka Wai Cheung, the inaugural winner of this tournament in 2015, was also eliminated in the Last 8 when he lost 4-0 to Peifan.

Attention now turns to the main event – the 2017 IBSF World Under 21 Championship. A historic and prestigious competition with a number of high profile previous champions (including Ronnie O'Sullivan), the victor will also be awarded a two year professional tour card.

The 29th edition of the championship is set to feature 71 players from 24 different countries. 8 of the last 10 stagings have been won by players from Asia – including the last 6.

Running parallel to this will be the World Under 21 Girls Championship. Among the entries for that include 3 Chinese players who, according to their profiles on the IBSF website, have all made competitive century breaks.

The Thai duo of reigning champion Nutcharat Wongharuthai and former champion Siripaporn Nuanthakhamjan will be very difficult to defeat. The pair just played the World Open Under 18's final here where Wongharuthai emerged a 3-2 winner.

To find out the full results and further information for any of the above tournaments, please visit the International Billiards and Snooker Federation website here.

Written and published by Michael Day on the 11th July 2017