​The Last 16 landscape in Beijing is exclusively split between European and Asian players, with exactly 8 from each continent making the weekend line-up.

Host nation China are predictably enjoying a fantastic championship with 6 representatives still in. The most impressive of them so far has been 17 year Luo Honghao, who emerged from the Group Stage as the Number 1 seed.

Luo, who already has a competitive 147 to his name, continued his ruthless form in the Last 32 with a 5-0 elimination of Thailand's Tawan Poollong. Having won all 3 of his group fixtures 4-0, he has claimed 17 frames in a row without loss. He has also made 4 century breaks, (including the competition's joint highest of 133 so far) three of those being in consecutive frames.

Another undefeated home hope through is 18 year old Zhang Jiakang, who was on course for a maximum break before missing the last red on 112 during a group game.

Other Chinese talents still cueing are Junxu Pang, Shengguang Wu, Fan Zhengyi and Bingyu Chang. China entered 8 players in this tournament and all 8 qualified for the Last 32 KOs.

However, no nation currently has a better strike rate in this year's tournament than Wales, who have all four of their initial entries still in.

The highest profile of them is Jackson Page, who came from behind in the deciding frame of his Last 32 game with Patrik Tiihonen (Finland). Page, still just 15, made a counter attacking 54 break to win on the final black.

Josh Thomond is still flying the flag for England, whilst the Republic of Ireland's Noel Flanders is also in. Mainland Europe have representation in the form Florian Nuessle (Austria) and Simon Lichtenberg, who only last week was playing alongside Lukas Kleckers for Germany in the World Cup.

There were a couple of well known eliminations from the groups, most notably the new World Under 18 Champion Muhammad Naseem Akhtar (Pakistan) and this year's European Under 18 finalist Amir Nardeia (Israel) - who also constructed an earlier effort of 133.

The 2017 World Under 21 Champion will be known on Sunday. The winner will also be rewarded with a two year professional tour card.

Picture above is courtesy of the International Billiards and Snooker Federation (IBSF).

Written and published by Michael Day on the 14th July 2017 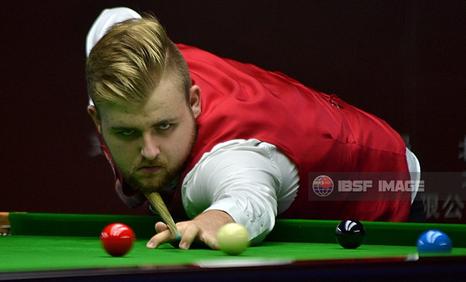