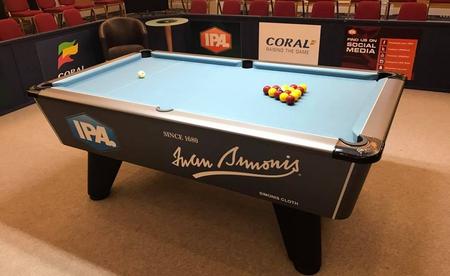 THE FIELD IS HALVED ON DAY ONE

It was a very busy opening day to the 4th annual IPA World Professional Blackball Championships with over 100 hopefuls having their dreams of the ultimate prize on the circuit already dashed.

Tuesday was dedicated to the preliminary and early rounds of the Individual Championship. In a new format for this year, matches were the best of 5 sets, with each set being the best of 7 frames.

There were some real stand out ties for such a young stage of the event. Current IPA English Amateur Champion Greg Batten was ousted 3 sets to 2 by Max Nosko (who was eliminated later), whilst last season's Number 1 ranked amateur player Michael Oliver also went down by the same scoreline to Toby 'Lightning' Bolt. Arfan Dad beat Darren McVicar 3-0 on the live stream table too.

Reigning BI World Under 23's Champion Ben Rowland came through after going the distance with one half of the IPA World Doubles Champions, Dean Shields - however Rowland would lose his second match of the day later on. 2016 World Seniors Runner-Up Jeremy Hooper beat France's Ivan Crenn 3-0.

Tomorrow will see the last amateur qualifying round. Those 32 remaining players will join the IPA's top 32 seeded professionals in the Last 64 stage of the competition.

Wednesday is also the starting point for the Doubles and Seniors tournaments.

Written and published by Michael Day on the 1st February 2017