Defending champion Gareth Hibbott was eliminated during Thursday's action in Bradford as the top 32 seeded professionals joined 32 amateurs in the Last 64 of the 2017 IPA Individual World Championship.

Hibbott's title defence started well with a comfortable 3-0 victory over amateur Darren McCarthy, but his hopes of back to back titles were dashed by fellow pro Ben Davies (a former World Champion himself) who progressed 3 sets to 1 later on in the day.

Such is the quality of the amateur qualifiers who emerged from the earlier rounds across Tuesday and Wednesday, this wasn't the only 'upset'.

Top 5 players Clint I'Anson, Simon Ward and Jordan Shepherd all fell at the first hurdle, as did 11 other seeds, meaning nearly half of the top tier contingent failed to make the Last 32.

However, the professional ranked number 1 and pre-tournament favourite Marc Farnsworth managed to avoid the same fate as he saw off Toby Bolt 3-1 and then 2015 champion Jack Whelan by the same scoreline on the live stream table.

2016 runner-up Craig Marsh had to dig deep and hold his nerve in deciding sets against both Jake Newlove and former multiple World Champion Andy Lucas - on both occasions he was 2-1 down.

Current BI World Champion Liam Dunster is still on course for a very unique double after also coming through a fifth set with Alex O'Donoghue in his second fixture.

Jon McAllister, Jimmy Croxton, Jimmy Carney, Neil Raybone, Dan Davy and Ronan McCarthy are the other professionals to advance to the Last 16.

Written and published by Michael Day on the 3rd February 2017 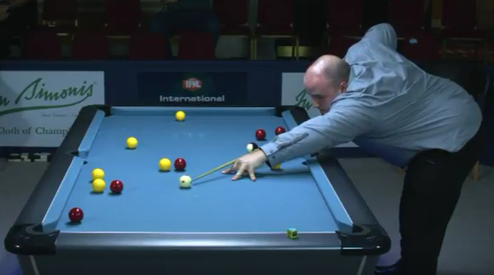