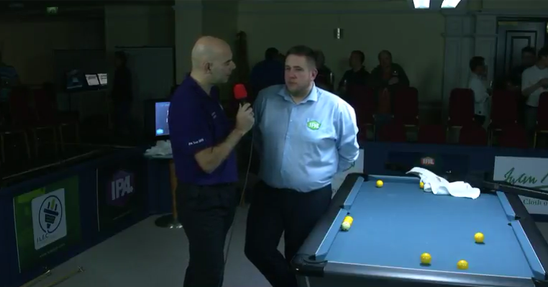 ​NEW IPA WORLD CHAMPIONS WILL BE CROWNED ON SATURDAY

From the original starting field of over 200 entries, just 4 remain, as we prepare for Finals Day Saturday in the 2017 IPA Individual World Championship.

Such was the strength, depth and quality of this year's line-up, just one solitary professional is in the final quartet; 2016 Runner-Up Craig Marsh, who clearly has unfinished business in Bradford.

Wales' Marsh has certainly had it tough over the last couple of days. Coming back from 2-1 down in both his Last 64 and Last 32 ties to win in a decider on Thursday, he repeated the feat against pre-tournament favourite and Number 1 pro Marc Farnsworth in Friday night's Quarter-Final.

Ian Ali (England) has been in superb form throughout. Having already won seven straight matches to get here, he has dropped just a total of 5 sets and beaten Jordan Church, Clint I'Anson, Brian Halcrow, Jimmy Croxton and Ben Davies on route.

In the bottom half of the draw Englishman Simon Fitzsimmons (pictured above, right) was the 'Comeback King' as he recovered from losing 9 of the first 10 frames to succeed in a final frame, deciding set thriller against fellow amateur Jeremy Hooper.

Hooper, last year's IPA World Seniors Finalist, raced to a 2 sets to 0 lead with 4-0 and 4-1 results. However, the match turned around dramatically as Fitzsimmons repaid the compliment (4-1, 4-0) to force a fifth set.

On the live stream table and in front of a gripped audience, the clash deservedly went to the wire as the score stood at 3-3. Hooper broke well in the last - but came up dry. Fitzsimmons held his nerve to clear the balls and book a Semi-Final berth.

​The last player to make it through was Frenchman Yannick Beaufils who emerged at 1am on the right side of a 3-2 scoreline against pro Dan Davy.

Unlike Ali and Fitzsimmons, Beaufils has beaten a seeded opponent in every round since the Last 64. Back in 2002 he reached the final of the WEPF World Championship.

The Ladies Championship is also down to the Semi-Finals. Just like Jason Twist's demise in the Seniors, there will be a new name on the trophy this year after two time back to back champion Debbie Burchell was eliminated by Michelle Roonay in the Last 16.

Written and published by Michael Day on the 4th February 2017