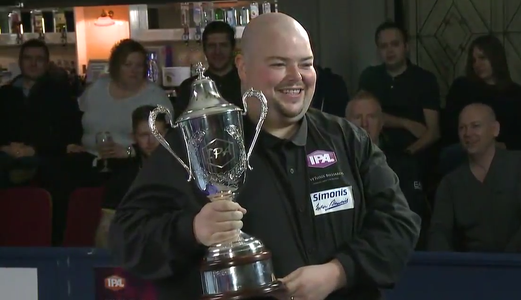 Craig Marsh banished thoughts of his heartbreaking defeat in last year's final by making amends and going all the way to become the 2017 IPA World Champion.

12 months earlier, in exactly the same arena, the Welsh cueist suffered in his chair as he watched opponent Gareth Hibbott coolly clear the balls in a last set, deciding frame thriller. Fast forward a year later and it was himself who felt the elation and joy of being the last player standing in the biggest event on the IPA circuit.

Marsh had it tough throughout in Bradford. In his First Round, Second Round and Quarter- Final matches he trailed 2-1 before having to win the last two sets in each for victory. That Last 8 success being against the pre-tournament favourite and current Professional Number 1 Marc Farnsworth.

Going into Finals Day Saturday he was the only remaining professional of the quartet and an even money shot to lift the trophy and pocket the £10,000 winners cheque; he lived up to the pressure.

His Semi-Final opponent Ian Ali in many ways had been the player of the tournament up until that point. Having won seven consecutive matches to reach the Last 4, he had dropped just 5 sets in total and took out Jordan Church, Clint I'Anson, Brian Halcrow, Jimmy Croxton and Ben Davies on route.

Ali started well by going 3-1 up in the first set, but it quickly turned around as Craig won three on the spin to take it 4-3. Incredibly, the exact same sequence was reserved in Set 2 as Ian levelled at 1-1.
But a combination of factors from there on in saw Craig become stronger as he claimed Sets 3 and 4 for an overall 3-1 victory.

His final opponent would be amateur Simon Fitzsimmons, a 33/1 shot at the start of the week.

Fitzsimmons came into the championship in great form having claimed a number of independent tournaments on the English Pool scene. During this event he eliminated seeds Josh Durant and Ronan McCarthy, as well as recovering from 2-0 down to Jeremy Hooper in the Quarters - keeping his nerve during a deciding frame finish.

Today he faced the classy, methodical Frenchman Yannick Beaufils who was aiming to reach his second career world individual final having been runner-up in the WEPF's version in 2002. He was also trying to become the first overseas player to reach the final of this competition.

However, Fitzsimmons made sure of an all British final when advancing as a 3-1 victor.

Later that evening, the stage would be set for the best of 7 sets title decider. Just like last year, you could have forgiven Marsh for having a sinking feeling as he watched Fitzsimmons blister his way to a 4-1 opening set win.

Yet one of Craig's primary qualities this week has been his temperament and refusing to panic when going behind.​ He got on the board with the second set and then went in front 2-1 at the mid-session interval.

On the resumption, Craig's strength continued to grow. He chalked up the fourth set 4-1 and then moved 3-0 up in the fifth - one more frame away from the title.

Looking as if that would be the end, he failed to get position on the black. In an attempt to pot the black when playing off the baulk cushion first, the cue ball went in off. Simon duly cleared to stay in it.

Not dwelling on that opportunity, Marsh returned to break in the next. Another feature of his game here has been his awesome break shot. He again got a very good split, found a ball into a pocket, and like he has done so many times this week, he cleared the table for an overall 4-1 win to become the new IPA World Champion.

After previous champions Gareth Potts (2014), Jack Whelan (2015) and Gareth Hibbott (2016), Marsh is the first non-Englishman to lift the trophy.

Written and published by Michael Day on the 5th February 2017