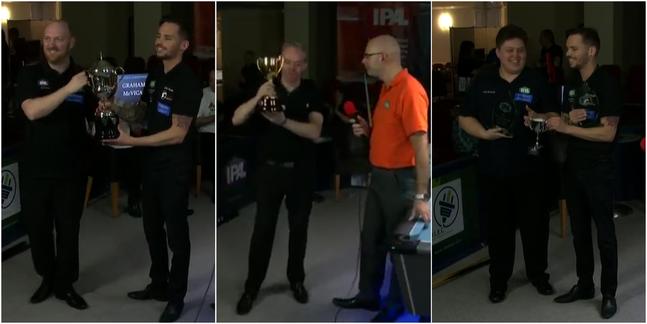 THE CHAMPIONSHIPS COME TO A DRAMATIC CONCLUSION

A trio of titles were decided on the sixth and final day of the 2017 IPA World Championships.

The night after Craig Marsh and Collette Henrikson's victories in the Individual and Ladies Championships respectively, there was still plenty of nerve jangling pool to be played at the Bradford Hotel arena.

As it turned out, all the winners of the events on Sunday had already claimed prizes of a similar nature before in their careers.

Gareth Hibbott bounced back from the disappointment of losing his World Individual and Doubles crowns earlier in the week by ousting Mark White 7-6 to become the IPA's Senior Champion for the first time.

In both the main Singles and Doubles, Hibbott had failed to get past the Last 16 in either defence. However, he still made sure of silverware with impressive wins over Andy Lucas, Steve Wall, Darren McVicar and Geoff Allen on route to the final.

White had played extremely well himself throughout the competition claiming highlight victories over Andy Blurton and Paul Harkness along the way.

Unfazed by the cameras in the main arena, White led 6-4 but was left helpless as his opponent cleared from his dry break, and then broke and dished from his own to force a decider.

White did make balls off a crunching split in Frame 13, but whilst on a clearance for the title, adrenaline perhaps caused him to over hit a positional shot when just three more pots away.

Although nearly ruining it himself, Hibbott coolly cleared up to bag yet another major honour.

The Doubles Championship continues to give us value for money and entertainment. Played in a 'Scotch' format with a 'BlackBall ShootOut' should the scores be tied at 6-6, there have been plenty of stories this week.

Plymouth pairing of Jez Graham and Darren McVicar had certainly been in the thick of it. In their Last 16, Quarter-Final and Semi-Final fixtures they found themselves 6-5 down and staring elimination.

Yet each time they managed to muster the twelve frame, and then hold their nerves in the Pool equivalent of a 'Penalty ShootOut'.

However, despite taking an early 3-0 advantage in the Final, it was long time friends Clint I'Anson and Jordan Church who blistered back with seven straight frames for the victory, and a £2,500 payday.

Church, who has made the switch to the IPA circuit this year, is a former two time WEPF World Junior Champion.

For I'Anson, it was the second time in three years he had tasted success in this tournament; back in 2015 he partnered Jack Whelan at the Magna Centre in Sheffield.

But that wasn't Clint's last participation. He instantly returned to the arena for the inaugural Mixed Doubles final with Deb Burchell. Burchell was looking to end her week on a high after being dethroned as the two time Ladies Champion in the Last 16, and become the first winner again of another IPA World Title.

In a gripping final, Burchell and I'Anson recovered from 3-1 down against Welsh team of Jonathan Busnell and Kirsty Davies to go 4-3 up, but eventually winning 5-4.

So much drama and entertainment the week has conjured, it seemed a fitting and deserving climax to have it go all the way.

Written and published by Michael Day on the 6th February 2017