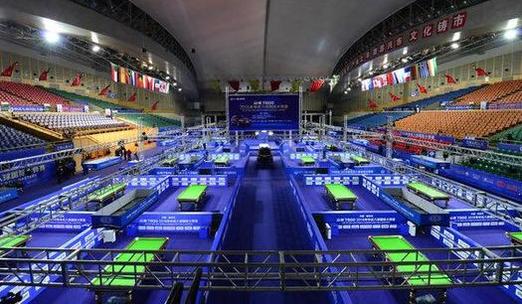 The line-up for the fifth edition 'Joy Billiards' World Chinese Eight Ball Masters is beginning to take shape with a number of qualification events lined up across different continents in the coming weeks.

Qinhuangdao City's Olympic Stadium (pictured above) will be the venue for the final stages of the event which will be held between the 10th-15th January 2017. There will be a field of 64 players present; half made up from the host nation China, and the other half being International entries.

Two players have dominated the history of this tournament so far. England's Gareth Potts (a 4 time World English 8 Ball Champion) claimed the inaugural event in 2013 and went on to defend it in 2014. Since then, home representative Yang Fan has been the possessor with wins in 2015 and 2016.

All 64 players will receive a pay out, but the overall champion will bank a cool 300,000RMB (over £35,000). With the popularity of this Cuesport increasing all the time, I have been told that sum will considerably increase come 2018...watch this space.

There are three avenues of gaining a place for the venue stages in January. First is by receiving
automatic entry; courtesy of being one of the competition organiser's selected invitees or wildcards.

One of the most recognisable of these nominations will be American Shane van Boening. The current 5 times US Open 9 Ball Champion has recently signed up with Joy Billiards, as he looks to add another honour to his incredible Pool CV. The full list of invites will be released soon.

The other two routes are via qualification.

China has so far staged a series of events held in Tianjin, Jiujiang, Tieling and Weihai to determine qualifiers. Each fierce heat also had its own individual prize purse too.

The remaining qualifying events have been / are being held across four other continents - Africa, Europe, North America and South America. Countries involved are Morocco, South Africa, the United Kingdom, Canada, the United States of America and Argentina. A real international feeling for this global event.

Next week Sandcastle Billiards in Edison, USA will hold their qualifier, whilst the Court Club in Peterborough, England will play out theirs on the weekend of the 26th. The following weekend Top 147 Snooker & Billiards in Richmond, Canada will have their turn.

Chinese Eight Ball is very much a hybrid of a number of pool rules and disciplines basically played on a small snooker table. It boasts 80 million fans in China alone - table manufacturer Joy Billiards has around 3000 clubs in the country.


Written and published by Michael Day on the 19th November 2016​​