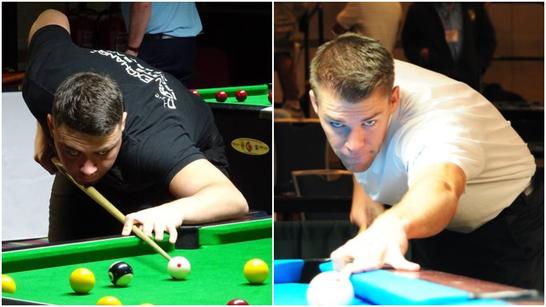 The latest round of International Qualifiers headed to England and the USA, with the winner of each assuring themselves a place in the main 64 player draw this coming January in Qinhuangdao City.

The UK event took place at the Court Pool Club in Peterborough over the weekend of the 26th & 27th November. The keenly competitive 16 person field featured well known cueists from the domestic English and American Pool scenes.

Coverage of  this match, and others from the Court Club can be viewed on  their YouTube channel

More specifically a smaller table baize expert, Whelan has played Chinese 8 Ball in China before, but has only just got back into the swing of things in this variant. Delighted with his win he said -

"I'm really pleased with the way it went. I hadn't played for 7 or 8 months since I last went to China. It was tough, but I got to grips with it in the end...plus by having some luck in the final! It is a great opportunity for me to go to China again, and to play in the main event is massive with all the superstars. I can't wait!"

American Pool star Corey Deuel also came through a tough field at Sandcastle Billiards, New Jersey on the 22nd & 23rd November. He remained undefeated throughout; culminating in a 6-0 Final win over Shaun Wilkie.

​Coverage of the Final can be viewed here. Other matches from the event can be seen on Sandcastle Billiards' UStream channel here.

​Nicknamed 'The Prince of Pool', Deuel is a multi time Mosconi Cup Team USA representative, and has won many tournaments stateside in a number of rule sets. He was US Open 9 Ball Champion in 2001.

​It will be Corey's second consecutive appearance at the venue stages of this event. Looking ahead to it he told The Cue View -

​"Yes, I'm looking forward to it. I hope to find a table in the USA to practice the game...it'd be great to see more tables like this. A true test of pool"

Both countries were hosting competitive Chinese 8 Ball events for the very first time; perhaps an indication of the worldwide expansion and potential this sport may have.

Written and published by Michael Day on the 28th November 2016