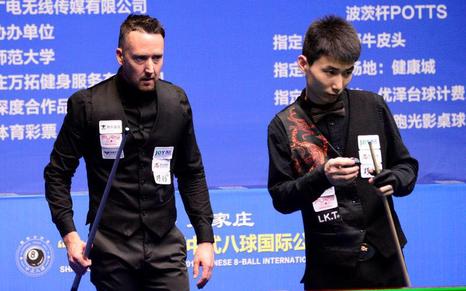 The host nation's Liu Yang went undefeated throughout as he won the 2017 JOY International Open and banked 200,000RMB in prize money.

This prestigious four day Chinese 8 Ball event initially featured 16 Chinese Qualifiers and 16 invited international stars from various Cuesports backgrounds. All races were the first to 13, but with a 140 minutes time limit in operation. The format was Double Elimination up until the Grand Final.

Despite the talent of the overseas players, only Potts was left representing the non-Chinese contingent come the business stages of the competition.

Arguably the world's best player in this discipline, Potts was going for a unique double having claimed his third World Masters title earlier in the year. However, despite winning a number of matches on both the Winners and Losers sides, his bid was halted by Liu who actually defeated him twice during the tournament - once in the Winners Section and then later in the Grand Final.

As expected, the final between the pair was keenly contested. With the time limit approaching, the Englishman looked in the driving seat as he led 10-9 with just 5 minutes to go. But in a frantic finish Liu broke and cleared to level it at 10-10 and then capitalised from Potts' dry break to run out the frame and take the front with literally seconds remaining.

Liu qualified for the final having won 5 consecutive matches. On his way he ousted Potts 12-11 in their first meeting and in the Winners Side Final he also squeezed through 11-10 over Wu Hao. Potts got back on track later on when he won 13-7 against Wu in the Losers Side Final.

To my knowledge this is Liu's first major Chinese 8 Ball title, although I understand he has been a consistent player on the scene. He currently possesses an ultra impressive record against Potts, having also defeated him twice during the 2016 JOY World Masters in Qinhuangdao.

Elsewhere during this tournament, the in-form Zheng Yubo bowed out in the Losers Side Round 4. Zheng won back-to-back tour events earlier on in the season.

Written and published by Michael Day on the 9th October 2017