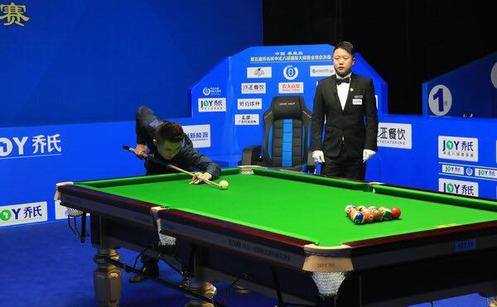 Zhang Kunpeng beat fellow countryman Shen ChongYang 13-10 in the 'Hot Seat' match to guarantee himself at least a sliver place finish. The 20 year old is now in the Grand Final, he awaits for the player to emerge from the B Side of the draw.

One of those players still fighting in that section is double champion Gareth Potts. The Englishman produced a terrific performance early in the day to defeat Dai Yong 15-10, but later faced elimination square on when trailing opponent Wang Peng in the evening session.

Wang started the match strongly in taking a 4-0 lead; he further kept that four frame advantage later on into the match (even going 8-3 up at one point). However, the 2013 & 2014 winner eventually got level at 9-9 before going ahead in the final stages. Potts led 12-11 when the 140 minute time limit expired.

In the same round on the Losers Side, Number 1 ranked played Zheng Yubo was comfortably dispatched 13-4 by Zhao Ruliang.

​Overall, it means there are just 6 players left in the event. Potts now plays the only other non-Chinese player left in Francisco Diaz Pizarro of Spain. Zhao takes on Xi Hongyu.

The winners of each of those matches will then play each other, the winner of that will play Shen ChongYang.

LOSERS SIDE - ROUND 6   *LOSERS ARE ELIMINATED*

LOSERS SIDE - ROUND 7   *LOSERS ARE ELIMINATED*

Written and published by Michael Day on the 13th January 2017