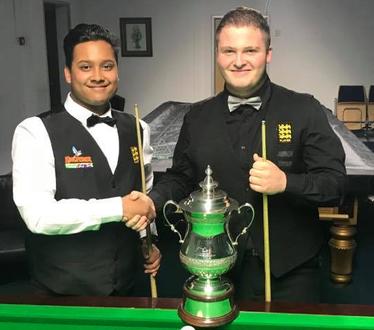 Riley Parsons defeated fellow England Youth International Hamim Hussain 4-1 in the final to win the 2017 edition of the MIUS Cup.

This popular event has been an annual fixture at the world famous South West Snooker Academy in recent years. Players representing England, Wales, Northern Ireland, Republic of Ireland, Belgium and even Hong Kong competed this time around.

Parsons qualified second from Group D with 4 wins out of 5. His only loss was a 3-2 defeat to table topping Belgian Ben Mertens.

Earlier in the tournament Tam made the highest break with a 124 clearance.

Hamim Hussain (Halim's brother) reached the final undefeated after a 100% record in his Round Robin. In the Last 4 he denied Hong Kong's other entry, Poon Ching Chiu, 4-1.

Parsons added his name to the roll of honour, picked up the trophies and banked £500 for his work. Hussain pocketed £250.

It has been a busy few weeks for the Youth scene. A few weeks ago the IBSF World Under 18 and 21 Championships were held in China, whilst last week the Home Internationals took place in Leeds. A few of those who were in Gloucester will now travel to Furth in Germany for the amateur rounds of the Paul Hunter Classic.

The picture above is courtesy of the South West Snooker Academy Facebook page.

Written and published by Michael Day on the 21st August 2017