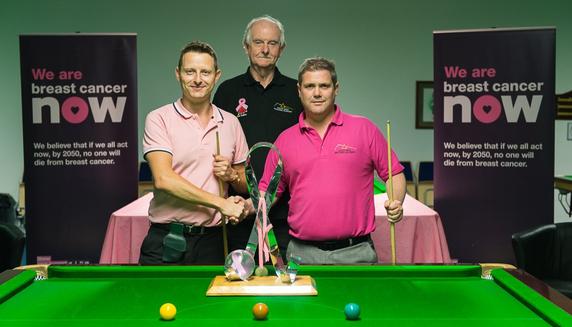 Yet more money was raised in the battle against Breast Cancer, as amateurs challenged professionals for the annual Pink Ribbon Pro-Am Championship. It is not yet known how much has been contributed this year, but since the inaugural event in 2010, over £73,000 has been donated to charity. All players wear pink to create awareness of the disease.

The opening two days of the event were dedicated to the amateur hopefuls. Those who qualified to the weekend professional rounds received an 18 points per frame headstart against the top tier opposition. As in previous years, the amateurs could enter the competition twice, therefore giving themselves two chances in the draw and value for money.

Despite the new season having already started, a number of pros still made the trip, although the final would be a clash of different levels as Milkins faced amateur Rob James, who was having a terrific event - he even made the Last 16 twice with his double entry.

The former top 16 member started the final very well with a century, but James came back with a contribution of 59 in Frame 2 to level.

Milkins re-took the lead via a black ball finish in the third, yet James levelled it once more at 2-2.

However, the Gloucester based cueman claimed the last two frames for a 4-2 win and lift the unique trophy for the first time.

The concept of this tournament was founded by the owner of the venue, Paul Mount, whose sister had passed away from the disease.

Congratulations to Paul, all his team, the players, officials and fans for being part of such a terrific tournament!

​Photo above is courtesy of Monique Limbos