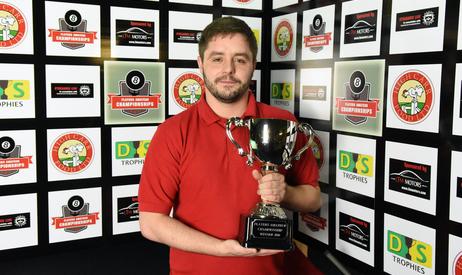 The second annual Players Amateur Championship begins this Friday and 2016 winner Craig Lakin will be back to defend the title.

12 months ago the Derby cueist scooped the inaugural edition of this high quality event and banked a cool £5,000. This year the champion's purse has been raised to £7,000, although the task ahead is even harder with the entries having been swelled from 64 to 86.

This is the last in a trilogy of massive independent tournaments that club owner and EPA Men's England Captain Lee Kendall and his team will run this year. So far we have seen pre-tournament 33/1 shots Shaun Storry claim £5,000 for winning the Bulldog Security Challenge and Rob Wharne pocket £10,000 when taking down the Supreme Masters earlier on in the season.

Played to the Blackball Rules discipline, given the strength and depth of the starting entry again it is more than possible that someone could emerge from the pack. However, competition favourite and former IPA professional Steve Petty (2/1) will hope this is not the case come Sunday evening at Players.

Such is the popularity and demand of these events, the raised numbers mean action will start earlier on Friday, although all the sessions will be covered by Beard Productions, who will simultaneously stream two feature tables.

A Double Elimination format for the Championship will again be used with the four undefeated players from the Winners Section (best of 21 frames) meeting the four who will travel the long road on the Losers Side (best of 15 frames).

At this Quarter-Final stage the £20,000 total prize fund tournament is reset and it will then be straight elimination all the way through.

Once more players from England, Wales and Scotland will be joined by those representing overseas nations; this time the Republic Of Ireland, India and Morocco.

After some early movement in the outright betting, current second favourite is Kent's former Two-Time WEPF World Junior Champion, Jordan Church (6/1), who got to the Semi-Finals of the Supreme Masters in July.

The person who defeated him there - Scotland's Scott Gillespie (12/1), will be looking to go one better than his Runner-Up finish at the Supreme.

Wharne is priced 10/1 to incredibly win back-to-back events, whilst this year's other previous winner Storry is 28/1. Reigning champ Lakin is also the same price.

Jez Graham, the Runner-Up at the Bulldog Security Challenge, is 16/1, and Semi-Finalists from this series of Players competitions Shane Thompson and Greg Batten are 10/1 and 16/1 respectively. This year's IPA World Championship Finalist, and a Last 4 player at the BSC, Simon Fitzsimmons is also 16/1.

Josh Kane may be of interest at 20/1; the youngster won the WEPF World Amateur Masters over the summer.

In terms of stand out Preliminary and Round One matches, Gillespie faces consistent performer Mike King first - King reached the Last 8 here last year and at the BSC in May. The pair also crossed cues at the Supreme Masters first round, with Gillespie coming through on that occasion.

2016 PAC Runner-Up Sam Bircher is scheduled to start his campaign against a qualifier during the tournament's 2.30pm opening session.

To keep up to date with all the latest news and results at this year's championship, please head over and request to join the Players Pool Events Facebook Group here.

Picture above is courtesy of Beard Productions

Written and published by Michael Day on the 24th September 2017​​