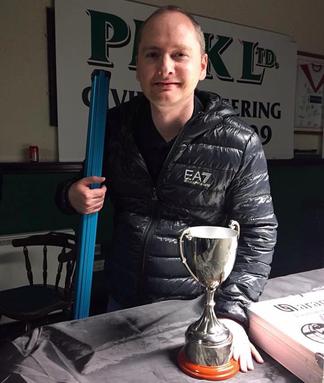 Former World Champion Graeme Dott ousted Birthday Boy and fellow countryman Eden Sharav 4-3 in the final to become the 2017 PMK Invitational Pro-Am Snooker Champion. It made amends for his defeat in the final 12 months ago.

This exciting annual event, held at the Minnesota Fats Snooker Club in Glasgow, pits professional players from Scotland and other parts of the UK against amateurs who have earned the right to be in the main draw. It is a great opportunity for fans to see big name players exhibiting their skills back in a club environment.

Now in its fourth edition, John Higgins won the inaugural staging in 2014 whilst Anthony McGill took the title in 2015 and 2016.​ McGill's hopes of a hat-trick were dashed, though, by Joe Swail 4-1 in the Quarter-Finals.

Dott, who reached the Last 16 of the World Championship last week, didn't drop a single frame on route to the final. He made breaks of 86, 88 and 84 in beating amateur Dylan Gault in Round One and then on Sunday registered a 55 in eliminating another amateur in the form of Northern Ireland's Jordan Brown.

Former Masters and UK Champion Matthew Stevens couldn't get a frame off him either during their Semi-Final meeting; Graeme chalking up efforts of 86, 98 and a maximum bid which ended on 104.

His final opponent Sharav has been in good recent form on the professional circuit. Positive results at the end of the season have earned him a fresh two year tour card courtesy of the One-Year list. He lost just two frames in three matches, all against professional opposition. Eden also made seven half centuries and exactly a 100 in getting there.

With both competitors in good form, it was no surprise that the final went all the way with Dott just coming through. During the match Dott constructed runs of 52 and 67, whilst Sharav had 52 and 105.

Amateur Players for this event are in green

John Higgins was due to play in the tournament but was obviously pre-occupied with a certain date at the Crucible!