After a frantic opening two days in Latvia, just 8 remain in the race for the 2017 Riga Masters - the first trophy of the new professional snooker season.

68 players were scheduled to originally make the trip to Eastern Europe following the qualifying round in the UK a few weeks ago (plus 4 held over matches). There were, however, a handful of withdrawals due to a variety of reasons, most notably World Champion and World Number 1 Mark Selby who apparently had a toe injury.

The biggest story from Day 1 was defending champion Neil Robertson being dethroned by rookie German youngster Lukas Kleckers, 4-3 in the Last 64. In all, Friday was a bad day for the top ranked stars as Stuart Bingham was dumped out 4-0 by Mark Davis and Barry Hawkins was ousted 4-3 by Ryan Day.

Performance of the round undoubtedly came from returning Swiss pro Alexander Ursenbacher, who rattled in breaks of 139, 78, 76 and 88 to thump Elliot Slessor 4-0. Slessor scored just 4 points during the entire affair, and that was from an Ursenbacher foul.

Continuous action on Saturday saw both the Last 32 and 16 completed. Perhaps the story of the tournament, and maybe season, so far is Ken Doherty. The 1997 World Champion was relegated from the main tour only a couple of months ago, but his career was given a new lifeline when he was rewarded with an invitational wildcard. My goodness, he is taking advantage of it already!

The Irishman is through to the Quarter-Finals following victories here against Gary Wilson, Robin Hull and Zhang Anda. It is the first time he has made the Last 8 of a major since the 2013 Welsh Open.

After his China Championship qualifying win (over Wilson again) in Preston, Doherty is 5 out of 5 this campaign - last season as a whole (if you don't include the ShootOut) he claimed just 6 altogether.

Doherty was close to meeting fellow legend and tour wildcard Jimmy White in the Last 8 after the Whirlwind produced back to back impressive successes over Eden Sharav and Kurt Maflin. However White, who was looking for his second ranking QF appearance in the space of 12 months, was denied by Anthony McGill 4-1.

Reigning Indian Open and Shootout Champion McGill could claim his third trophy inside a year - a unique achievement.

In running tournament favourite is Stephen Maguire, who surely will be in contention this season for silverware.

Capitalising on his run at the Crucible, the Scottish 5 time major winner has enjoyed a superb start to 2017/2018. Of his 4 matches in this competition so far he has dropped just 3 frames - all of those to Oliver Lines in the Last 32 where he came back from 3-1 behind.

During his Saturday evening 4-0 defeat of Jack Lisowski, the former UK Champion registered runs of 139, 83 and 93 as he restricted his opponent to just 13 match points.

Maguire will face Andrew Higginson in the morning; Higginson pulled off a tremendous turnaround against Davis in the Last 16 - winning 4-3 after being 3-0 down. It will be just his third career major QF appearance and his first since the 2012 Players Tour Championship Grand Final.

​In the bottom half of the draw, Ryan Day's dream of a maiden major title could finally be realised this weekend in Latvia. The 4 time ranking finalist held his nerve to eliminate Wilson in a decider to book his Last 8 berth. In 2017 so far he has reached the final of the World Grand Prix, the invitational Championship League, Semis of the Gibraltar Open and Quarters in the German Masters. Will this be his time at last?

Joe Perry will certainly hope not - he is the next opponent for the Welshman. Perry has eliminated Graeme Dott (in Preston) and Dave Gilbert, both in deciders, on route.

​Despite the number of big name absentees, it being the start of a new season and short BO7 matches, it is still amazing that just Mark Williams of the Worlds elite is still in.

A China Open finalist at the start of April, two time World Champ Williams has not lifted a major ranking trophy since the 2011 German Masters - nearly 6 and a half years ago.

MJW will cross cues with Mark Joyce in the Last 8. Englishman Joyce is now in his 12th season on the top tier and perhaps Sunday will be his real big breakthrough. The 33 year old has featured in three previous major Quarter-Finals, but as of yet has not gone further.

A very unpredictable, but exciting and intriguing tournament so far. Sunday is bound to offer more twists and turns.

5 of the 8 left have been major winners before, whilst Higginson, Day and Joyce will be hoping tomorrow brings their first.

Saying that, of those 5, only McGill has been in the winners circle recently.

Written and published by Michael Day on the 24th June 2017 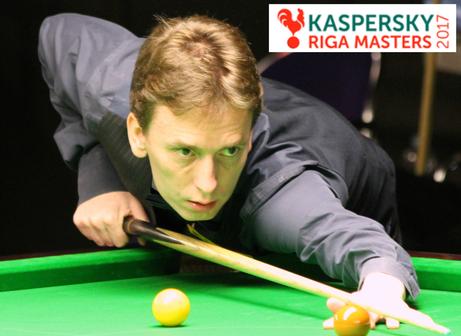