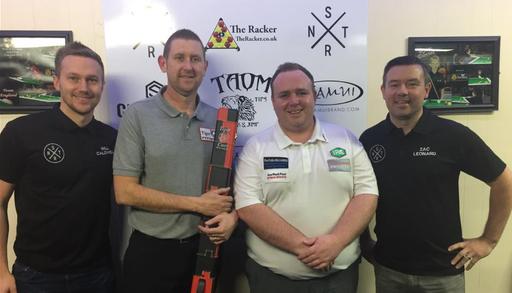 Ben Davies held his nerve on more than one occasion to win the inaugural STRN Open.

The Welshman navigated his way through a gauntlet of world class players in Manchester to claim the £2,500 winners purse. Starting out on Friday evening, the event featured 68 entries, including all three of English 8 Ball Pool's current World Champions.

The trio all qualified undefeated into the Last 16 single elimination portion. However, as evidence of the competition's strength and depth, none of them reached the final.

First to be eliminated was the odds-on pre-tournament favourite Mick Hill in the Last 16 when he was ousted by this season's IPA Number 1 Ranked Amateur Michael Rhodes, 10-9.

Davies, a former World Champion himself, was involved in the first match on the streamed table when he recovered from an early deficit to eventually overhaul promising youngster Ryan Davies 10-7.

He then won 10-8 against Ian Martin but followed that up with a 10-7 loss to Lee Killen. Using his second life in this Double Elimination stage, he made amends in a 7-2 success over Lee Washbrook.

The tournament was then reset for the Last 16 KOs. Davies eliminated Matt Brierley 10-4, 2016 IPA World Champion Gareth Hibbott 10-6 and then came from behind to dislodge friend, fellow countryman and reigning IPA World Champion Craig Marsh 10-9.

The top half of the draw took longer to unfold, but emerging from it was Blackpool's Lee Clough, who was making a remarkable return to big time pool after four years out.

Like Davies, Clough, the 2012 IPA Professional Masters Champion, advanced to the money rounds by virtue of the Losers Side. He qualified after a 7-5 win over this year's IPA World Championship Runner-Up Simon Fitzsimmons.

The final was broadcast on the world famous UNILAD Sport platform where hundreds of sports fans tuned in to watch. They would see Clough start strongly, producing clinical pool to establish 6-1 and 7-2 advantages.

However, Davies dug deep and rattled off five consecutive racks to draw level at 7-7.

​Clough responded with a break and run to go back in front at 8-7, but his opponent followed suit in the next to square it again.

The Englishman looked poised to go on the hill first but an in-off whilst attempting to get pin-point position on the black allowed Davies to punish and take the lead for the first time. Yet Ben was unable to finish the job off himself when coming up dry on his break in Rack 18; Lee capitalising with a reverse run.

So, after hundreds of racks of pool across the three days it came down to just one for the title. Clough broke and managed to make a ball, although the lay of the land was not the most straightforward - especially considering the pressure of the situation and a difference of £1,400 in prize money too.

With 3 of his reds and the black remaining, Clough wobbled a ball in a corner pocket and Davies spent little time clearing up his set for a gripping 10-9 win.

Davies himself took some time away from the sport but has returned to full time duties this year. He already won major silverware at the IPA UK Professional Championship in Newcastle in June.

The STRN Open was the creation of Zac Leonard and Will Caldwell, who have put in a lot of time, money and effort getting it off the ground. I have only heard positive vibes around it and as a fan it was absolutely spot on to watch.

There was also an STRN Ladies Open which was won by Lynette Horsburgh when she got the better of Vicki Lomax 5-2 in the final.

I hope both become annual additions to the Blackball calendar and that the STRN brand expands its portfolio of events. It sounds as if they have some interesting ideas.

To see the full results from the 2017 STRN Open, please visit Cuescore here.

The image above is courtesy of Beard Productions.