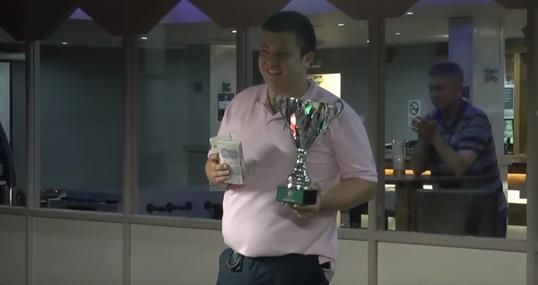 This unique 64 player event featured talents from either side of the English Pool divide; a rare opportunity for fans to see both sets of players compete in a major competition together. With a seriously impressive total prize fund of £23,000, the winner's purse of £10,000 represented the joint largest payday in the sport this year.

Starting on the Friday evening, the tournament was initially played under a double elimination format up until the Quarter-Finals. The remainder of the championship was then a straight, single elimination Knock-Out.

​Mark Boyle (Scotland), Christophe Lambert (France), Scott Ross (Scotland) and Jordan Church (England) were the four who came through unscathed from the Winners Side.

Wharne was part of a quartet who recovered to emerge from the B Side and join the unbeaten players to make up the Last 8. The eventual winner qualified by virtue of an 8-4 victory over fellow EPA England team-mate Karl Sutton.

Karl O'Donoghue (Republic of Ireland), Scott Gillespie (Scotland) and Greg Batten (England) also made the most of their second chances - Batten enjoyed a colourful avenue through following narrow wins over Luke Sanges 8-7 and Josh Kane 8-6 before comfortably eliminating Jimmy Croxton 8-1 to qualify.

With the event effectively now re-setting, each of the remaining players in the cosmopolitan line up was guaranteed to be paid.

The random draw would pitch Wharne against heavy pre-tournament favourite Boyle, who was looking to add another major honour to the trio of IPA titles he has already won in 2017. However, the form book was thrown away as Wharne showed character to break and dish in a deciding frame having squandered opportunities to get across the line a couple of frames before.

In the Semi-Finals he once again proved his nerve. Predictably, his clash with Batten was a close affair which would also go the distance. Having won the lag at the start of the tie, Wharne again had the right to break in the 21st and final frame. It was deja-vu as he coolly cleared the table without response - including a superb positional shot to land on the black.

Waiting for him in the final was Gillespie who had seen off compatriot Ross in the Quarters, and then clinically ending the hopes of Church in the Semis.

As luck had it, the two finalists had both come from the B Side of qualifying. The pair had also met during those earlier rounds when Wharne coasted to a comprehensive 11-3 victory. Perhaps that previous outcome gave the Englishman a psychological upper hand.

Wharne held an advantage throughout much of the opening exchanges in the final, but the duo were all square at 8-8 come the final stages. However, a combination of capitalising from his opponent's errors and some brilliant shot making himself, Wharne would escape and record an 11-8 success.

Nicknamed 'Whacker', Rob's achievement over the three days is even more remarkable when you consider he has only just learnt this rule set recently.

Much credit must go to Lee Kendall and his team for staging and delivering this special tournament. Having both groups of players under the same roof and playing for big prizes was a real treat for Cuesports fans.

In a sport where politics have divided us many times in recent years, this was evidence of what can be achieved if we were all on the same page at the top level. We are stronger together.

The third and last major event of the year at this venue will be the second annual Players Amateur Championship running from the 30th September to 1st October.

Results from the Quarter-Finals onwards - losers each received £1,000

The picture above is courtesy of Beard Productions