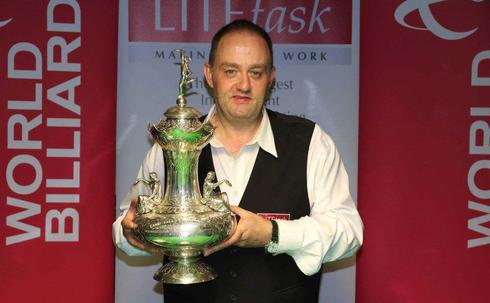 12 time and defending World Billiards Champion Mike Russell will be hoping it isn't 'Unlucky 13' for him in Leeds over the next couple of weeks.

Players from as far as India, Singapore, Australia and New Zealand have travelled to the Northern Snooker Centre in an attempt at glory during these Championships that are steeped in history.

Spread across 13 days, there will be a festival type feel to proceedings with multiple events taking place. Just like last year the final stages will be live streamed on the dedicated World Billiards YouTube channel.

​The action in Leeds gets underway on Friday with a qualifying event to determine the 4 remaining places into the main draws. This will be under a Round Robin format, with those emerging getting entry into the Timed and Points Championships.

Across Saturday and Sunday we will see the Jim Williamson Memorial World Open. Labelled as a 'warm-up' to the main events next week, this is a major championship in itself and will feature the top names. Victory here will not only be rewarded, but valuable practice and perhaps confidence will be taken into the Worlds.

Just like the World Open, the World Championships themselves will initially be played in Round Robin groups of 5, with the top 2 from each group and the 10 best third placed cueists advancing to the Last 32 Knock-Outs.

The first World Title to be awarded will be the short 100up Championship. Last year Dave Causier overcame India's Dhruv Sitwala 8-6 in a thrilling final of this quicker style Billiards format which has been an addition to the schedule this decade.

However, the main event will be the traditional Long Up Championship which has been in existence since the 19th century and has been won by some of Cuesports' greatest ever stars.

Russell ended a 5 year wait to once again claim English Billiards' biggest title when he crushed outgoing champion Causier 2224-1115 in last year's five-hour final. This also served as revenge having lost to Causier in the Semi-Finals of the short event a few days previously.

Following on from this success, Russell - who coached the Malaysian National Cuesports Team for the South-East Asian Games in the summer, had a sterling 2016/17 season.

After initially taking a few months off from the circuit, he returned to win the UK and European Opens, and then at the end of the campaign conquered the Vimy Ridge Classic and Americas Cup Double in Canada.

Already one of the all-time greats of the sport, the 48 year old has won World Championships in four different decades and is arguably the pre-tournament favourite for this edition.

His task will be far from easy, though, as there are a number of contenders poised to take his crown.

Singaporean citizen Peter Gilchrist, the 1994, 2001 and 2013 winner, ended the campaign as the World Number 1 after a trio of successive tournament victories at the Borders, Scottish and English Opens.

Hall will also be trying to retain the World Open title he won here 12 months ago.

Elsewhere in the draws are Robin Wilson, Robert Marshall and Martin Goodwill, who were finalists in last season's British, Borders and English Opens respectively.

A little closer to home, enthusiastic Austrian duo of Martin Schmidt and Markus Bauer will also be present.

Picture above is courtesy of Matt Huart.

​Written and published by Michael Day on the 18th October 2017