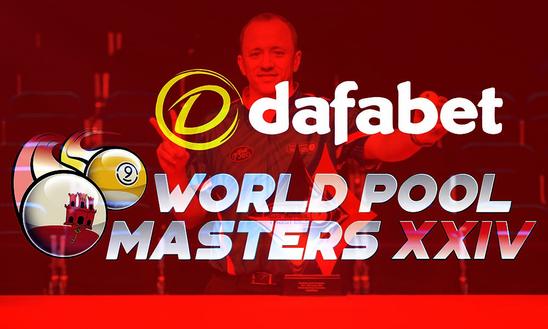 Following a small hiatus in 2016, the prestigious World Pool Masters returns this Friday for its 24th edition. The Tercentenary Sports Hall in Gibraltar becomes the new home for the event; the small British overseas territory located near the foot of Spain only homes a population of just over 30,000, but has a recent history of hosting major snooker and darts events in the same venue.

​This tournament is steeped in history. Many of 9 Ball Pool's greatest ever exponents have played in, and worn the World Pool Masters crown. The event is strictly invitational and features a 16 player, straight knockout format. All matches are race to 8, winner breaks.

Shane Van Boening is the defending champion once again - 'The South Dakota Kid' is actually going for a 3-Peat here after his victories in Nottingham (2014) and Manchester (2015).

However, the field is a goldmine of 9 Ball Pool talents who are aiming to dethrone the American and scoop the $20,000 first prize.

We break the draw down and take a look in more detail...

Many casual viewers of the sport have probably only seen Van Boening compete in the annual Mosconi Cup team event between the USA and Europe. I think it is fair to say, for whatever reason, that Shane does not tend to produce his best game in that competition.

He is, however, a deadly singles competitor who has won a record equalling 5 US Open 9 Ball Championships throughout his career and reached the last two World Championship finals in Qatar.

He gets his bid for a hat-trick underway against dangerous Spaniard Francisco Sanchez Ruiz who makes the relatively small trip (compared to others) to the venue.

​There is the potential of an all-Spanish Quarter Final as David Alcaide (Spain) takes on German Pool legend Ralf Souquet next down on the drawsheet.

By an absolute country mile, Souquet is the most successful player in the history of this great event having won it an incredible 6 times!

His earliest win came back in 1994 and his most recent in 2011. Francisco Bustamente, Thomas Engert and Van Boening are the only other people to have won this title more than once, yet they have 'only' claimed this trophy twice. Souquet is the ultimate 'Master'.

​Reigning World Champion Albin Ouschan of Austria looks to fill an empty space on his Pool CV. Ouschan has taken many of the sport's top honours including the China Open and winning the MVP award at the Mosconi Cup last December.

Due to visa problems his scheduled opponent has been changed twice. It was originally supposed to be former World Champ Francisco Bustamante before he was replaced by fellow Philippines countryman Lee Van Corteza.

It will now be an all European affair as he clashes with the 'IceMan' Mika Immonen of Finland. Immonen is one of the all time great players with credentials to match. He too, though, is missing a World Masters title - he came very close in Las Vegas 2008 when narrowly losing out in the final.

​Another last minute replacement is Cheng Yu Hsuan (Chinese Taipei) who steps in for the seeded Wu Jiaqing (China). Better known as 'Kevin Cheng', the Asian star burst onto the international stage by winning the 2015 US Open.

Cheng faces jovial, crowd-pleaser Naoyuki Oi from Japan - a terrific and successful player who is used to playing in front of the Matchroom Sports cameras.

2016 Player of the Year Shaw continues to collect trophies and cheques; an incredible winning sequence throughout pretty much the whole of last year culminated in him depositing the winning 9 ball for Team Europe at the Mosconi Cup on debut. At the moment he really is a supreme winning machine and it will take something very special to break him down.

Polish cueist Wojciech Szewczyk is the unfortunate player to have drawn him, although Szewczyk himself could be a quiet threat. Currently ranked Number 6 in Europe, he has been to the final of the World Cup of Pool before whilst representing his country.

​The ever effervescent Alex Pagulayan was the champion in 2008. A former World and US Open Champion too, he starts his tournament up against local Gibraltarian qualifier Stephen Webber.

​Niels Feijen is the fifth player in this esteemed field who has taken this title before (2013). The Dutchman (like so many other players here, I suppose) has a catalogue of awards and achievements - highlighted by his World Title success in 2014.

Feijen travels to a lot of events and comes fresh from winning the Bucharest Open only a fortnight ago.

He will have to be careful, though, when he meets Omar Al Shaheen; the Middle-East's highest ranked player.

​Number 2 seed Chang Jung Lin is from the conveyor belt of talent to emerge from the Chinese Taipei. He is also second in the World Rankings and has been a World Champion in the 8 Ball discipline.

His opening fixture with England's representative Mark Gray looks set to be the hardest to call of all the First Round matches. Gray is a three time winner of the Mosconi Cup, as well as a constant champion of domestic and European events.

Who do you think will win the 2017 Dafabet World Pool Masters? Let us know via our Facebook or Twitter pages.

Written and published by Michael Day on the 14th February 2017